Day 2 in Vienna started out much like day 1. Cloudy and a bit of drizzle. However, given the forecast was 100% showers and the sky cleared to reveal beautiful skies by afternoon the day before, we were hopeful for much of the same.

We had breakfast at the hotel (standard European breakfast of coffee, tea, meats, cheeses, eggs, yoghurt, pastry, juices and CHAMPAGNE). While the breakfast was fabulous and the breakfast room equally fabulous with a view to St. Stephens Cathedral, the music selection was not. Geesh we are in one of the world famous music cities and all they can play is rehashed 70s hits recreated by no name artists. (Ever heard Lionel Richie’s “Party” at 7:30 in the morning sung one beat too slow … it’s not pretty.)

Anyway, Cheryl and I headed out in our Inspector Clouseau garb and across the square to buy tickets for the evening tour of St. Stephens Cathedral. We found the ticket booth and encountered the rudest woman I have ever met. (And I assure you (1) that is saying a lot and (2) I am not exagerating.) She looked at us like we were idiots and informed us there was no such tour. Uh lady … your website says otherwise. (And you work for a church for crying out loud! What happened to brotherly love??) After getting nowhere with this beatch we left the Cathedral and walked back across the square only to run into … Brenda, our guide from the previous day. She was waiting for a couple staying in our hotel who she was taking on a tour that day. We explained what had happened at the Cathedral and Brenda immediately sprang into action. Walked back with us to the Cathedral, found someone in the know and determined that the tours occur on Saturday nights at 7:00, the meeting location was outside by the large tower and if it was raining or wet, the tour would be cancelled because the stairs are too slippery to climb.

With much thanks and hugs all around we said goodbye to Brenda. (She really was fabulous.) So with the evening planned, we headed out of the square to the location for the start of the Ringstrasse tram tour which would take us around the entire ring of the old city. Only problem was we went in the wrong direction. (Actually we were told the wrong direction by our front desk. The tour location had apparently changed and our hotel staff did not know about it.)

So instead of heading back, we decided to visit the Naschmarkt first rather than later in the morning. The Naschmarkt is the oldest market in Vienna and while it did not match the subperb middle east markets I have visited, this one was impressive nonetheless. The array of spices was fabulous, albiet they were bagged rather than sitting in open bins. There were numerous restaurants, bakeries, and fresh produce stands. And the couple de grace …. we found a Turkish bakery that had the best baklava I have had this side of Capadoccia, Turkey. Cheryl can attest to the tasty goodness that was the baklava …. ahhhhhh.

So after our visit to the Naschmarkt we headed in the direction where we had come from stopping to look at the beautiful Vienna Opera House. (Cheryl could not stop taking pictures. I have now learned that my sister has a photo fetish. She takes pictures of everything. And by everything, I mean everything. She even took pictures of her feet on the footrest on the BA flight to London. Classic!) After the photo fest at the Opera House, we continued on through the plaza past our hotel to the other side of the Ringstrasse to pick up the tram. The tour was interesting although it only took slightly more than 20 minutes to cover the entire route. What made it interesting, however, was that we were given headphones which provided a commentary and history of the sites around the ring.

At the end of the tour, we hiked up the hill to get a better look at the oldest church in Austria and then circled back towards the underground for our trip to Schonnbrun Palace. By now Cheryl and I had covered her required 10,000 steps and then some. (By the end of the day we reached 20,000 steps or 10 miles!)

Anyway, we got on the subway and headed to the outskirts of Vienna to visit the Schonnbrun Palace, the summer residence of the Hapsburgs. We had a timed entry of 2:30 and arrived almost an hour and a half before hand so we could visit the beautiful gardens and the magnificent Glorietta: a huge arched building at the opposite end of the palace. The walk to reach the top was pretty steep, but the resulting views were magnificent. We ended up resting
in the overpriced restaurant, had tea, coffee and some raspberry cream cheese dessert that was a lot lighter than it sounds.

Around 2:00 we walked back down the hill and reached the entrance to the Palace in time to see a wedding taking place. Not sure who was being married, but the Austrians around us seemed rather interested as they were all lined up on staircases and doorways to get a glimse. (We figured it had to be someone known to them.) Anyway, by the time we got inside, it was right at our timed entry of 2:30. We checked our bags and began the tour without a tour group in sight! Yay. (It pays to go to palaces late in the day.)

So we wandered 20 or so rooms visiting studies and bedrooms, and greeting areas, playrooms, dining rooms and the Great Hall, which was the scene of the meeting between Kennedy and Kruschef during the Cuban Missile Crisis. The rooms was adorned with magnificent paintings, baroque style furniture and lots and lots of china and porcelin “stuff”. 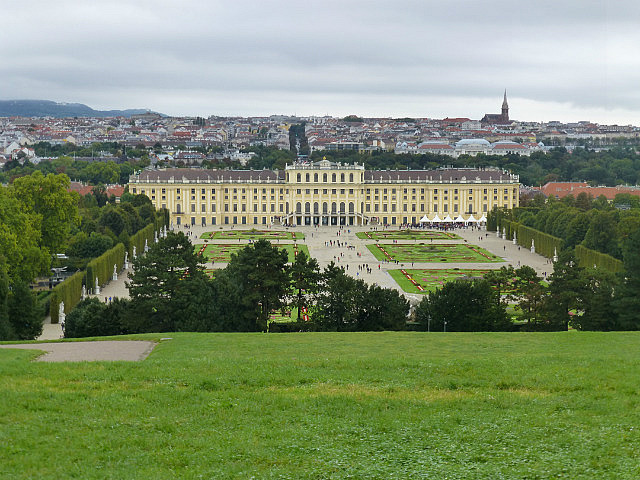 Now during the tour there was an international incident involving Cheryl and a Chinese man. At the beginning of the tour, we were told absolutely no photos. Well wouldn’t you know it. Near the end of the tour this Chinese fellow barges ahead of us and immediately takes a picture. The Austrian man beside me and I immediately looked at each other and shook our heads. Cheryl on the other hand walked over to him, grabbed his arm, pointed a finger at the camera, shook her head and said no photos! I was cracking up. That, however, was not the end of it. As we walked to the next room, the fellow appeared to be trying to get directions from one of the security staff. Cheryl went over to the staff person and told her that the guy was taking pictures. The staff person immediately told him he had to delete all the pictures. At this point, the guy acted like he didn’t speak English (despite the fact he had been asking for directions in English). Cheryl was pissed and couldn’t figure out why the camera wasn’t taken form the guy. We finally walked away, with Cheryl shaking her head. I, on the other hand, was laughing my butt off. (I have seen the photo violation so many times and no consequences it has long ceased to bother me.) I understand that the Chinese Premier and President Obama have scheduled a meeting to discuss the international incident. (There may be trade sanctions in the works and possibly a crisis meeting in the Great Room.)

Anyway with nothing more we could do to harm relations between the world superpowers, we wrapped up the tour. I was surprised that the actual tour only took about 55 minutes. In fact, we were on our way back to Vienna proper by 3:30. By the time we got back to our hotel it was close to 4:30. Cheryl and I had a rest back at the hotel and around 6:00 we heard a commotion out in the square. Drums and shouting. Sounds like a protest to me.

We opened our window looked beyond the square and saw a little group of people flanked by cops. There were as many cops as people (9) and we finally figured out it was an animal rights group (uh maybe “group” is a strong word for the little gathering … ) Anyway, the folks spread a blanket in the square, laid down for a couple minutes and then called it good. Meanwhile the cops circled them and once they realized the protest was over also called it good. Gesh … someone needs to teach these folks how to protest.

After having a good laugh about the “protest”, Cheryl and I walked across the square for the night tour of St. Stephens. Only problem. No one seemed to be able to tell us anything about it. What the H? After waiting by the tower, watching 7:00 p.m. mass let out and not finding anyone who could help us, we gave up. We decided instead to walk down the street to what had become our favourite restaurant: Restaurant Beim Hofmeister, for a glass of Gosser beer and that fabulous pumpkin soup. We wandered back to our hotel around 8 and called it a night. Ten miles will do that to you.