I left Inle Lake early Thursday morning. I have to say that while I thoroughly enjoyed my day on the lake with Wendy, I left not understanding the over the top reviews for Inle Lake (sorry Diana). Yes it was pretty, but so many of the sites have been commercialized and quite frankly the garbage I saw in the lake was off-putting. My hotel on the canal was lovely, the food fantastic and the staff simply wonderful, but I have to say … I don’t get it. Maybe it was the fact that the over the top fantastic trip to Mrauk U had set a high standard, but Inle Lake for me was not one of the top highlights of my trip.

So with Inle Lake behind me, it was time to move on to Mandalay. Our plane was actually on time, but while I waited in the departure area at Heho airport I amused myself by watching the various reported times around the world on a screens above the departure door. For some reason, the times were a few (or quite a few) minutes off for each city. For example, when it was 10:12 p.m. In New York, it was 2:49 a.m. in London and 4:07 a.m. in Paris. Huh?? Last I checked the time difference was five and six hours respectively without any minute differential. Hysterical.

Anyway, I landed in Mandalay and was immediately met by Moe Moe, a lovely young girl who was to be my guide for the next 3 days. I was no sooner in the car and Moe Moe was suggesting changes to my itinerary. She thought we should stop at Inwa (one of the three royal cities) on the way to Mandalay proper since Inwa was close to the airport and Mandalay was a 45 minute drive away. We were supposed to do Inwa on Friday, but he change was fine by me.

So I had no sooner landed than I found myself at the little jetty where a boat would take us on a 3 minute ride to the other side where a horse cart awaited to take us around the Inwa area. Inwa, or Ava as it was also known, was the capital on and off dating as far back at the 12th century. The history may be deep in this part, but the area is mostly rural now with ruins dotted around the countryside along with a lot of newer temples and stupas. 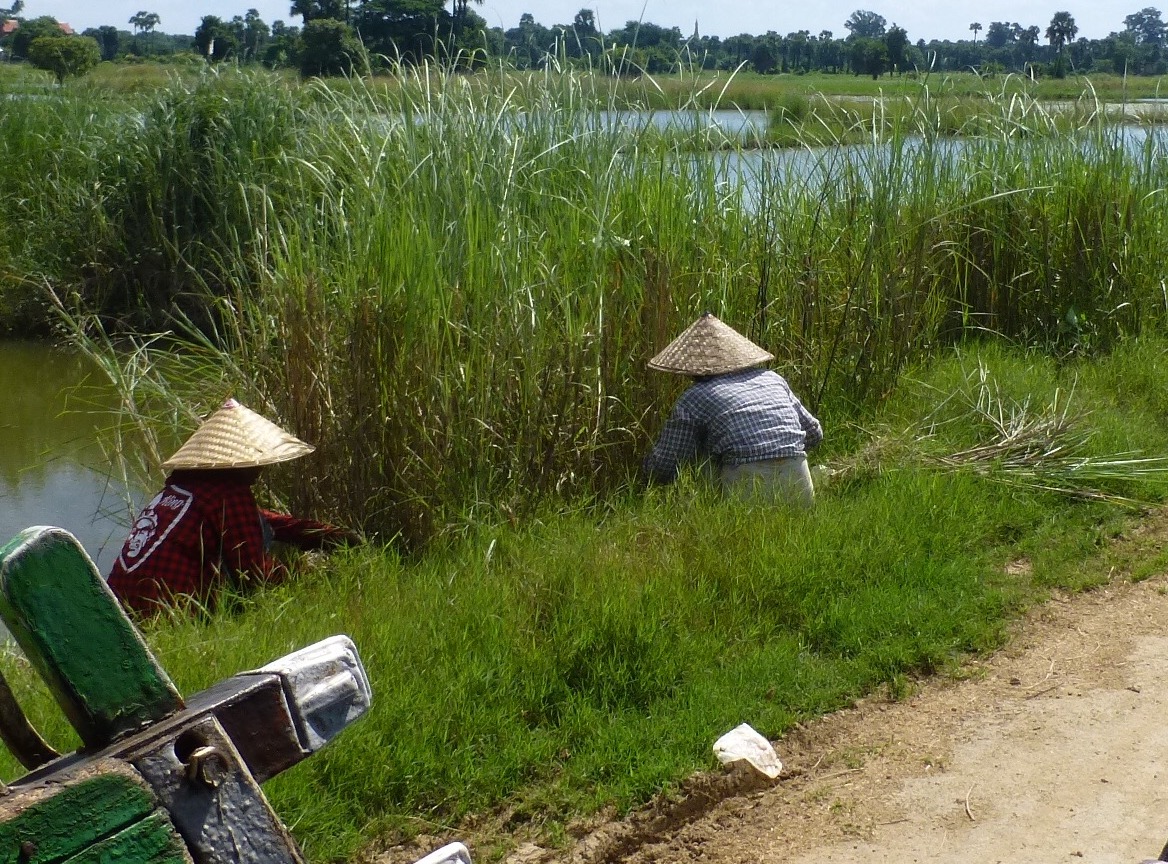 Once on the other side, we climbed into the horse cart and began the bone jarring ride on a mucky, rock jutted road past vendors and hawkers and locals buying produce. I was tossed around like a piñata. Thankfully, we finally turned onto a smoother road and the ride actually became enjoyable as we clopped along past villages and villagers going about their daily lives. There were cows wandering beside and in the middle of the road, chickens and dogs and little kids everywhere. The area was actually quite pretty with little ponds, flowering trees and rice fields all around.

After almost 30 minutes we reached our first destination: Bagaya Kaung. A magnificent teak monastery built in 1834. The monastery was constructed of 267 mammoth teak posts that apparently each measure 9 feet in circumference and 60 feet high. The monastery was actually a working monastery with a little school area in the prayer hall including hanging globes to teach the novice monks geography. I loved this place.

First, there was hardly anyone in there. Second, the carvings in the wood were as intricate as you would find anywhere with lotus flowers, peacocks, dancers and yes, even ogres. It was simply beautiful and so well preserved. The prayer hall was dark and cool and peaceful. It might have been my favourite building in Myanmar to date. I could have spent the entire day just sitting there. Definitely a happy place.

After the lovely visit, we climbed back in the horse cart and made our way past a lake and down a dirt lane to our next stop: Yedanasimi Paya. An ancient set of three stupas and some Buddahs sitting, including one sitting under a flame tree. It was another gorgeous setting.

Once back in the horse cart, the real fun began. We turned down this muddy, dirt road and I thought I was going to break some bones, or at the very least, throw out the entire alignment of my body. It was ridiculous. I hit my head twice on the roof of the cart and, at one point, was almost thrown out of the back of the cart. Look up “bone rattling” in a dictionary and you will see a picture of me in that damn horse cart.

As we jolted along, we passed some former palace walls and a tower, which is apparently the only standing structure left from the palace. When I thought my butt could not take it anymore, we finally pulled up to the OK Kaung Royal Monastery built in 1822. The monastery was made of brick and covered in white stucco. It was a magnificent building filled with … hordes of school children who were laughing, running, playing and loud, loud, loud. The empty building echoed so their screams and laughter were magnified. It was fun for a bit, but any longer and I am sure I would have jumped out of the building.

We climbed back into the dreaded horse cart for the 10 minute ride back to the jetty. Maybe I was simply done in by the ride, but the last 10 minutes, while pretty rough, did not seem quite so bad. All in all, I had really enjoyed the trip around Inwa, but walking might have been a better option.

So after the quick ferry trip back to the other side we were soon on our way to Mandalay. We had a brief stop for lunch and then made three stops at local craft workshops. The first, a wood carving and marionette making shop did not, unfortunately, interest me in the least, but I did not want to be rude to Moe Moe who seemed excited to show me the local artisans.

The second, a series of marble carving workshops was fascinating. Not only for the craftsmanship, but for the simply fact there were apparently no health and safety regs in effect whatsoever. The men and women wore no masks and were using power tools to skillfully carve Buddahs and other temple objects. The amount of skill was astounding, but the idea of doing that dusty, powder inducing work without so much as a mask scared the hell out of me. I wasn’t that close to the work and even i was covering my nose and mouth with a scarf. Yikes. I felt for those folks.

The final stop was the gold leaf workshops. As I’ve mentioned in previous posts, the pious love to paste 1 inch square gold leaf on their favourite Buddahs. I just presumed that the gold leaf was machine made. Uh … that would be incorrect.

So after the art classes, it was back to the highlights of Mandalay. First up was the Shwe In Bin Kyaung monastery. This was another teak monastery built in 1895.

We wrapped up our visit to the monastery and headed a couple blocks down the road to the Mandalay Palace. Now I don’t know why, but I wasn’t expecting a lot, but I could not have been more wrong. This place was spectacular. Beautiful grounds, wooden buildings and hardly anyone around. We ended up climbing the 121 step tower to get a view of the palace and surrounding area. It was absolutely lovely.

The original palace dated to the 1850s and had been rebuilt in the 1990s after being destroyed in. World War II. The restoration was really well done and the buildings actually resembled an old palace. The throne room was particularly impressive as was the Great Hall with its myriad of pillars and gold markings. Totally worth the visit.

The final stop of the day was to the Kuthodaw Paya also known as the home to the “world’s largest book”. The paya was a mid 19th century temple housing 729 inscribed marble slabs covering all of Buddah’s teachings. Each marble slab was in its own little stupa. The place was actually pretty incredible.

As we wandered around, a young girl approached me with a little round log of wood and motioned to my face. Uh oh. Now you may have been wondering from the pictures I have posted, what’s up with the white stuff on the face of the Burmese women. The “white stuff” comes from a paste made from branches of a tree and is known as thanaka. The women take a little water and rub the end of the tiny log to form a paste. The paste is applied every morning and is used as both a sunscreen and cooling agent. It is also said to be great for the skin.

Anyway, this woman wanted to put some on my face and make a little design (i.e. a leaf). Good grief. I wasn’t particularly interested, but Moe Moe seemed to think it would be fun so … when in Rome. I think the picture speaks for itself about what my thoughts were on the final product.

Anyway, if that wasn’t enough, the woman wanted me to buy bamboo postcards. She wanted 10,000 Kyat for 5. Yea. Thanks, but no thanks. I told her I’d give her 1,000 Kyat for the one with the elephant and 1,000 Kyat for the artwork on my face and that was it. Deal. She seemed happy so that was good enough for me.

By now, it was close to 5:00 p.m. and Moe Moe suggested we go to the top of Mandalay Hill to watch the sunset. I was done in at this point, and fully expected that clouds would block the sun if we attempted the hill climb. Nevertheless, we set off for the top and … sure enough, by the time we got to the top, clouds were rolling in. I could not buy a sunset in this country. The view was pretty spectacular though and despite some clouds, there was still a little bit of pink in the sky as the lights of Mandalay far below were turned on. Time to head to the hotel and get a little rest.