I slept 8 glorious hours in La Paz then had a lovely breakfast and was met by my guide Sergio just after 9:00 a.m. for a “local” tour of La Paz. First up was the Witches Market in El Alto city which is a the second-largest city in Bolivia, located adjacent to and above La Paz (and thus a higher elevation by approximately 650 meters – that would be 2,132 fees). La Paz sits at 4500 meters and El Alto sits at 4150. El Alto was actually part of La Paz until 1985 when it became its own city. El Alto is considered an indigenous city having absorbed thousand upon thousands of migrants from the villages of Bolivia and Peru (where many indigenous people live).

Because El Alto is an indigenous city, many of the Incan and Aymara traditions are alive and well, including the Witches Market. Now in order to reach El Alto, we took a tram. Yep you read that right. The entire area is connected by series of incredible trams. In 2012, the Bolivian government hired an Austrian company to build a series of interconnecting trams to solve the traffic congestion and it is incredibly ingenious. (Having been to Austria, it actually reminded me of the tram my sister and I took in Innsbruck up into the Alps.). Hey Sound Transit … it only took La Paz 6 years to have six tram lines up and running with 4 more in the works. How’s that 40 year commuter rail project working for you?!

Anyway, we grabbed a mini-cab with a number of locals and off we set for the tram. (Again, this was a local tour and we were going to be using local transportation so … when in Rome.). Once on the tram, we were transferred high above La Paz and up, up, up, up to El Alto. And what a difference. Whereas in La Paz, I had been comfortable with my jacket unzipped, I immediately zipped up my jacked and put on a a wool hat. The change in temperature was incredible.

In addition, the cultural difference in La Paz and El Alto was immediately evident. Whereas La Paz had a more modern feel and look, El Alto was distinctly not. Many buildings were unfinished, the roads were rocky and there were far, far more traditionally dressed women. Clearly a poorer city. Also, I learned that the reason buildings remained unfinished was not only due to cost, but a desire avoiding paying taxes (you only pay property taxes once a building is completed).

Anyway, upon exiting the tram, we crossed a very rocky parking lot and headed towards the Witches Market, as series of shops selling homemade remedies and potions needed to bring to the Shamans to perform their thing, followed by a series of blue sheds with doors where the Shamans plied their trade. There were Shamans for virtually every occasion. Typically the Shaman prescribes offerings for luck, love and health. However, black magic is also practiced here and a Shaman can be employed to destroy a person’s health, or harm a person’s business. While we walked, we passed a burning offering that included fruit, which Sergio said meant that the offering was from a couple seeking fertility treatment.

Now about these offerings. The offerings are prescribed by the Shaman, but given to Pachamama (Mother Earth). Typically, the offering is contained in a bowl and will include dried candies, herbs and small charms or statutes depending upon what the Shaman orders. In addition, there are llama fetuses which are some of the most important offerings to Pachamama. (Good news. The llamas are not killed for the fetuses. The llama fetuses are either the result of miscarriages or stillbirths.)

So we wandered through the stores and then stopped at a small pair of frog statues. Sergio told me that the larger statute was male and the smaller was female and that the statute represented the balance of life that is so important in the Witches Market. (Sort of like yin and yang.). The frogs also were a symbol of money. I guess if you make offerings to the frogs you may become wealthy. 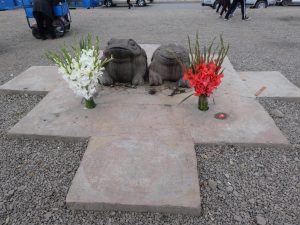 We walked past a number of open doorways, but I did not dare enter. There were a myriad of “cholitas” wandering around the area. Now a little bit about cholitas. Cholitas are indigenous Aymara and Quechua women from rural areas who are easily recognized in bowler hats and the many layers of skirts they wear. For years, the cholitas were discriminated against and could be denied taxi and restaurant service and even the pleasure of walking in a square or down the street. However, in 2005, Evo Morales was elected to power, the first indigenous president of Bolivia. And with his election, the cholitas were empowered and over time change has occurred to the point where it has become fashionable to be a cholita. Cholitas own buildings in which they operate dance halls, own retails shops and even hold seats in parliament. No one looks twice now when a cholita passes.

Anyway, after wandering around the real Witches Market (I say real because there is another one in La Paz near my hotel, but it more of a tourist attraction than the real deal), we headed off towards the large El Alto produce market that is home to some really wacky looking produce. Sure there was the regular mangos and bananas, but I saw some of the larges gourds and pumpkins I have ever seen. In addition, there was dried potatoes and dried peaches.

The drying process is pretty cool. They Bolivians (and Peruvians) use an ancient Incan technique. They take the potatoes (or peaches), which are placed on mats and constantly sprayed with water for a week. Then the potatoes (or peaches) are left in the sun to dry. Because of the high altitude, the sun emits enough radiation to dry the potatoes or peaches hard. The preserved fruit or potato can then be stored and used for years to come.

So after the market, we grabbed a min-cab and piled in with the other locals for a trip back to the red line. We took the tram back down to La Paz and has we were being transferred down in these amazing people movers, I could hear music. I looked down and there was a parade as far as the eye could see. Sergio told me that today was the day that Bolivians celebrated Independence Day. Huh? I thought that was on the coming Monday. Well yes that was true, but the parade always happened a few days before. The parade apparently includes all the school bands, marching office workers and pretty much anyone who wants to participate. Cool. I wanted to see it and Sergio promised at the end of the tour he would take me to a spot where I could watch it for a bit.

As we continued downward, the parade faded from view and we reached our end point. We once again caught another mini-cab and headed off for the main square. First stop was a walk down a very narrow alleyway/street that old the last of the old colonial houses in La Paz.  The houses (and alley) were simply lovely.  Apparently there is now  a push under way to preserve the colonial buildings, which I hope happens because they were simply too nice to destroy.

At the end of the alley we wandered onto a main thoroughfare to grab a quick bite to eat. We stopped at small little shop and Sergio ordered two llama empanadas. Little half moon shaped puffed pastry filled with a somewhat spicy llama meet. It was deliciouso.

We ate and walked towards the main square, which included the Presidential Palace, the main Cathedral and the Administrative Building. We went into the Cathedral (no pictures allowed) where I learned that the Cathedral was used solely by the wealthy non-indigenous people (the San Francisco Cathedral, which we would visit later was built and used by indigenous peoples). The Cathedral (no pictures please) was over the top ornate, with gorgeous marble floors and massive gold leaf icons all over the place. Mass was going on when we entered and there was a collective 5 people in the massive church. Sergio said that while 80% of Bolivians identify as Catholic, the only time most people attend church is on Christmas, Easter and other special holidays.

After the church, we took a look at the Presidential Palace and Administrative Building while Sergio gave me a history lesson on Bolivia.  Turns out that Bolivia has two flags (which you see hanging from both the Presiential Palace and the Administrative Building.  One flag is the country’s national flag and the other flag is the flag representing all the indiginous people in the country.  I wasn’t sure if that was an advanced idea or a way to keep the two cultures (spIn the interim, a little indigenous dance and music show started up in the main square. It was pretty short lived, and as near as we could tell they were celebrating Mother Earth.

We then left the Main Square and wandered a couple blocks to the San Francisco Church. Unfortunately, it was not open, but the exterior façade was remarkable for the many indigenous symbols that were included in the exterior wall. 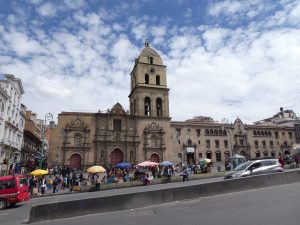 Then as promised, Sergio and I grabbed a cab and headed south so that I could go watch the parade (which had apparently change routes from prior years so it would not by passing by the main square, but several blocks south so as not to disrupt traffic into the area). The traffic was horrendous. We finally reached our destination and walked in the direction of the music. We found a nice little corner block and watched the massive line of bands, baton twirling ladies, flag wavers and office workers march past. It was a riot.

The small kids were the best. Some were not paying any attention and simply looking at there shoes are shoving one another, others in the band had stopped drumming entirely because they were exhausted, still others were holding the hands of people I presumed were their parents.

What was particularly interesting was the lack of interest shown by a number of people.  Throughout the time I stood there, people walked in and through the parade.  In fact, at one point I saw a truck try to cut across before it was stopped by the cops.

However, the best, best, best thing I saw was a group of what appeared to be marching high school girls in short skirts and ridiculous high, high heels. Now bear in mind that the women were marching on cobblestones for 2 ½ hours or more up and down hills. It was a remarkable display of either vanity, stupidity or sheer awesomeness … I couldn’t decide. 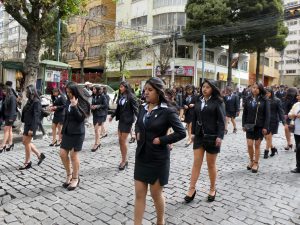 I finally said goodby to Sergio, but hung around the parade for another half hour or so. There was absolutely no end in site and the music was lots of fun to listen to so what the heck. I finally decided it was time to go back to my hotel so I walked back in the direction of where we had been dropped off earlier, walked down a hill to a street going back towards the city and flagged a radio cab down. Next thing I know, we are back in the narrow streets of old town La Paz and finally back at my hotel. It had been a really enjoyable day!