So I had signed up with Red Cap Tours for their food tour. It sounded super cool in that we would be visiting local restaurants, eating local food and drink and generally learning about the Bolivian food culture. The instructions were to meet at the front of the San Francisco Church at 6:00 p.m. to meet the guide.   I left my hotel a little early, wandered down the hill from my hotel past the tourist Witches Market, the myriad of ladies selling street food and clothing by the side of the road, and the endless soccer jersey stores to reach the church.

Turns out the trip only took ten minutes so I was 20 minutes early.  I ended up meandering around the square in front of the church. By 6:00, I did not see anyone in a “red cap”. I continued to wait and look around and decided I would give it until 6:20 and then leave. About 6:10 someone tapped me on the shoulder, and I turned to find a fellow (Daniel wearing a “Red Cap” baseball cap. Yay. He apologized for being late. … traffic (of course) and asked if I was ready to go. Uh wait. Where is everyone else? Apparently I was it for the night. Fine by me.

Daniel turned out to be a complete hoot. He received a business degree in London and then came back to Bolivia to find out he was “too” educated. Everyone he interviewed with felt he would take his job so no one would hire him. A friend suggested the tourism industry because his English was so good and then next thing he knew (well actually 3 years of study later) he was an accredited guide.

So we set off for our first stop a mercado (local shopping area) near the square made up of micro stalls where you pull up and stool, take a seat and eat whatever is that stall’s specialty. First up was a small stall that served “api” and pastries filled with cheese. Now I had seen people drinking api (a corn based drink) in Copacabana, but had not tried it.

Daniel and I found a stool and I was promptly served api morado (made from purple corn) and a pastry filled with cheese and covered in powdered sugar. The api was surprisingly good. It had hints of cinnamon and cloves, but was incredibly filling. The pastry was lovely, but I told Daniel if I finished both I wouldn’t be able to eat anything else. So after finishing about half of each, we moved on to the next stop.

The next place was another little stall in the Mercado that served healthy green smoothies. I watched as the lady loaded in bananas, honey, greens, oranges, pineapple and mango. She topped it off with some puffed cereal and handed it to me in a massive glass. It was absolutely delicious. But there was no way I was finishing this either. For some reason, Bolivians love to serve massive portions of food. I could have easily gone for just a sampler, but no I was served this massive smoothie (and this was not even the large size). I got through about half of this before I called it quits.

We left the Mercado and headed down the street and up a small hill to a restaurant called Alaya. Now this was purely a local establishment. Not a single tourist in sight. In fact, it was so local that a chollita and her husband were dining there.

The plan was to order “the best beer in Bolivia”, which was apparently Huari as well as mondongo, pork simmered for hours in a spicy red sauce and served with corn and potatoes. I can report that the beer was delicious (a lager), but the pork was absolutely out of this world. It was so tender it fell apart when I picked up a piece to put on my plate. The potatoes, were the potatoes that had been dried and rehydrated and I have to say I was not a big fan. The taste was very peculiar and seemed kind of water logged although they were not mushy. It was just a water flavour. The corn was interesting. It was white and the kernels were huge. A little chewy, but lovely flavour. However, as I said, the star of the show was the pork and sauce. Without a doubt, the best thing I have eaten to date (aside from the magnificent lunch prepared by Josefina near the Colca Canyon.)

Now once again the portions were massive. It was with great regret that I could only eat a small portion of the mound on my plate. Fortunately, I suggested Daniel take it home with him, to which he eagerly agreed. The mondongo is apparently is favourite dish.

So after the stellar meal, we headed across the street and up yet another hill to a small colonial style bar. We sat down and were served a drink called singani. Singani is a local beverage made with white muscat grapes and mixed with egg whites, cane sugar and lime. It was powerful and delicious. Along with the singani we were served a corn soup which had bits of pumpkin and carrot in the broth. It was really, really good. I actually managed to finish about three quarters of the bowl. 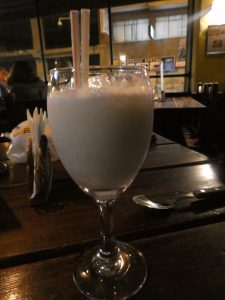 Daniel and I proceeded to have a lengthy conversation about U.S. politics over the singani and soup. It is always interesting to talk to a well educated individual from another country who is trying to understand what the heck is going on in the United States.

After the soup and political discussion, we were served a classic, traditional Bolivian bar food: pique a lo macho. This dish is made in a spicy red broth and has red and green peppers, chicken, beef, sausage, onions, a wedge of tomato and a half a boiled egg. Legend has it that three drunk guys were headed home in Cochabamba after a late night of partying and wanted some food. A street vendor was closing up her stall, but the guys demanded a huge bowl of food. She did what she could, but the drunks demanded more. She finally went into the back of her stall and threw in everything but the kitchen sink and pique a lo macho was born. The drunks raved about the meal to their friends who returned the next day to ask the proprietor to make them the meal. She refused, but days later when the mayor heard about the meal and stopped by to try the food, a national dish was born.

Anyway, this bowl of food I was served was a “taster” and it was still too much. (I later saw the actual proportion and it was massive.). The meal was actually really good with just the right amount of spice. The meats were tender and the peppers had a nice crisp texture. (I avoided the onions since I do not like onions.)

By now I was stuffed, but we had one more stop. We walked across the street for desert for a quinoa brownie and a glass of red wine. The quinoa brownie was divine (served with whipped cream and strawberries). The red wine was a little sweet for my taste, but still quite good. I managed to eat about half of the brownie and was trying to figure out how the heck I was going to make it back to my hotel without falling down in a food coma.

Daniel and I headed out of the restaurant and down a small narrow street, followed by a right turn and viola we were back in front of San Francisco Church. I said goodbye to my lovely host Daniel and walked back towards the massive hill I had to climb to return back to my hotel. The street ladies were still out in force as were the “witches” as I huffed and puffed up the mega hill. Once I reached my hotel, I collapsed on my bed. It had been a long, wonderful day, but all I wanted now was to sleep.

One thought on “Food … Glorious Food”