So while the salt hotel was exceeding nice, what was not nice was the lack of heat. It made my hotel in Uyuni feel like Miami Beach. I actually wore my down coat to bed. Seriously. The tiny little heater in the room (which was the sole source of heat) had no fan so it was essentially useless. The only other time I could think of when I was this cold was when I was attending Laurentian University in Sudbury, Ontario and I road the team bus from Sudbury to Kapuskasing to watch my boyfriend play hockey and the heater went out in minus 20 degree weather. (It was so cold on the bus you could see our breath.)

Anyway, I was never so glad to get back into the mighty Toyota Land Cruiser with the heat blasting so I could feel my fingers once again. We headed back across the salt flats towards the island I had hiked they day before (Isla Incahuasi) passing the same stunning reflections with a slight twist. There were actually a few puffy white clouds today making the trip across the flats even more surreal. At one point, I saw a vehicle in the distance and it actually looked like it was flying through the clouds. Wild.

Once at the island, we veered to the right and started a bit of a climb. At this point, we were heading south. As we increased altitude, the salt flats became dry giving me the alternative the salt flats experience (and one I had actually expected to have) travelling over pure white salt that left you feeling life you were driving through snow. 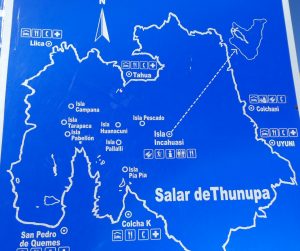 By late morning, we had left the salt flats and hit dry land. We had started in Uyuni, headed across the flats to Isla Incahuasi, north to Tahuayo (where I spent the night) and then southwest to the land.  Our destination now was the little town of San Juan where we were going to visit the necropolis at Kausay Wasi and have lunch. Turns out, however, the restaurant was closed because the proprietor was trying to recover from the Bolivian Independence Day celebrations the day before so lunch would have to wait.

Instead, we wandered around the necropolis, saw a few tombs containing long deceased Aymara people along with some pretty cool pottery that had been recovered from the tombs. Fortunately, the morning sun had warmed the air a bit so it was actually a pretty nice little stroll around the necropolis.

After the short little hike, we hit the road again and began to climb through the Andes lowlands (lowlands being a figure of speech given that were at over 13,000 feet). I was having a bit of a time with the air. Every time I went outside I began to cough, It was brutal walking around in the thin air.

Anyway, we continued our journey through remote little villages and mining settlements on what I can only describe as rough rocky, dirt roads broken up by the occasional sandy stretch. As we bumped along, magnificent mountains across the Chilean border came into view (as did yet another smoking volcano). We continued to climb up through the Andean “lowlands” and finally stopped at a little rest area for lunch.

Rodrago and I took a little walk around the area and in just the short little hike I was left completely breathless and coughing. The thin, cold air was brutal on my poor old lungs. We finally went inside and I gulped down two cups of coca tea, which immediately ended the coughing.

After lunch, we continued winding higher through the “lowland” desert with little shrubs lining the sandy, VERY bumpy makeshift road we were travelling on. Occasionally we would have to pull over to let another land cruiser coming towards us pass as the “road” was only wide enough for one vehicle at a time. After about an hour and half the first of four lakes came into view. Lago Canapa was surrounded by mountains and … bonus … was filled with flamingos. Yep, you read that right. Flamingos. There are apparently three types, Chilean, James and Andean. These appeared to be James flamingos because they had deep red legs which is the hallmark of the James flamingo. I couldn’t wait to jump out and take a look.

Juan pulled the car over and Rodrago and I took a short little hike towards the lake. Now as cold as it had been earlier, it was now multiplied because a severe wind had come up making it absolutely frigid. Nevertheless, I took off my gloves and began to snap photos of the amazing sight of flamingos in a partially frozen lake with the snow capped Andes in the background. Finally, when I could no longer feel my fingers, I packed it in and we hiked back to the warmth of the car.

Next up was Lago Hedionda and it too was filled with flamingos. This time we also saw a couple of white flamingos, which Rodrago said were Chilean flamingos. We were able to get a lot closer to these flamingos because the lake edge was not frozen so the flamingos were feeding a lot closer to where we were standing. Again, the Andes backdrop made for spectacular scenery as we watched these wacky flamingos wander around eating.

By now the wind was approaching gale force and I couldn’t take any more. So we hopped back in the car and drove another 20 minutes or so on the same windy, narrow rocky “road past a completely frozen Lake Charkota. The sad part was the lake was frozen and there wasn’t a single hockey player in sight. Such a waste of a frozen pond.

Juan took us up and over a hill to reach the last lake, Lago Onda (meaning deep). This lake was not frozen, but there were also no flamingos around. Apparently the lake is too deep for the flamingos making it difficult to feed.

As we passed Lago Onda, the road became even more bumpy, if that is possible, and we entered a series of very narrow canyons in which we went up, down around and through. The walls of the canyons were piled high with red rocks and shards of rocks and all I could think of is that I was one Andean earthquake away from saying sayonara. Fortunately, with Juan’s amazing driving skills and the blessing Pachamama, we made it through the canyons unscathed.

Just as we were leaving the last of the canyons, we spotted Andean rabbits. These little animals had massive long tails and were as friendly as could be and apparently lived under the rocks. They came right up to the car and Rodrago got out and began to feed them some crackers. Apparently that is why they are so friendly. The passing vehicles stop and fed them so they have lost some fear. I don’t think that is a good thing, but that appears to be what has happened.

So we sat and watched the rabbits for a few minutes before we took off through the last curve in the canyon and back onto sandy open terrain. And in case anyone was wondering, the music was just as eclectic and awesome as the day before: Rolling Stones, U2 (Juan loves U2), the Kooks, Train, Suzanne Vega, Rihanna, Adele, Pharell and Counting Crows to name a few.

Anyway, the last bit of driving for the day took us up even higher and around a small mountain before we reached our hotel. And the best part? When we got into the lobby, the hotel had a roaring fire going in the stove inside the entry way. I literally stood in front and hogged the stove until I felt sufficiently thawed to go to my room. Now while this room was somewhat warmer than the last hotel (same company), it was still far colder than I would prefer. However, I would layer on the clothes, do my hibernation thing under the blankets and endure one more night for the sake of what had so far been a wonderful trip. The first two days had been wonderful. I couldn’t wait for Day 3.