So Day 2 in Dublin would be spent on our own. I had planned a visit to four different sites as well as some wandering around Dublin proper. After a lovely breakfast, Cheryl, Donnie and I ordered a cab and ten minutes later (around 8:45 a.m.) we were wandering through St. Stephen’s Green, a magnificent public park in the center of Dublin. There were beautiful ponds filled with ducks and swans, gorgous flower gardens, little bridges and statutes everywhere and lots and lots of green. At one time the park was used for public executions and was the site of a portion of the fighting between the British and the Irish in the Easter Uprising of 1916. The park even restricted access to local residents until 1877 when the park became a truly public park with the help of Guinness family money. 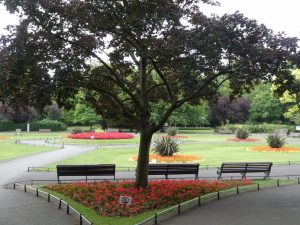 The park is rectangular in shape and spans several blocks in each direction. Access is gained by several entrance placed about the park and includes a magnificent arch known as the Fusiliers’ Arch, which commemorates the Royal Dublin Fusiliers who died in the Second Boer War. The Arch opens on to Grafton Street, which is one of the more popular shopping districts in Dublin.

The exhibit was really wonderful. We rented audio guides, which provided an overview of the creation of the Book of Kells, including how the calf skin vellum was created, the transcription and illustration methods used by the monks involving a series of minuscule dots, (as well as the running commentary they would insert, which were later deleted, about how monotonous the work was), and information about other old religious books in the Trinity College collection.

After viewing the exhibit, we then moved to an environmentally controlled room where were able to view the Book of Kells pages on display this day. Today we saw the illustrations of the Portrait of St. Mark and the Opening Words of St. Mark along with the text of Mark 15, sections 36 to 45. It was really pretty special (no photos thank you).

After viewing the Book of Kells, we moved upstairs to the Long Room of the Library, which was built in 1712 and contains over 200,000 of the Library’s oldest books. What I found pretty cool is that the library has rights to receive every book published in the Republic of Ireland. Amazing. Apparently newer books are kept off site in an enormous storage facility.

Cheryl, Donnie and I all agreed the tour of the Book of Kells was really wonderful (and actually for me was the highlight of the day). After the tour, we wandered down the cobblestone (and very narrow) streets and ended up walking to Temple Bar, an area in Dublin consisting of lots of restaurants and bars, including the world famous Temple Bar. We ended up popping in to the actual Temple Bar and finding seats just as a duo was taking the stage. We had a drink and listened to some Irish (and contemporary) music before leaving the bar and heading down the street to the Christ Church Cathedral.

Now originally, I had booked a tour for 12:10, but apparently on Saturday they had changed the time to 1:10 and it would only be a tour of the tower. So instead of taking the tour, we grabbed the pamphlet that detailed the top sites in the church and followed our own little self-guided tour.

We learned that the original cathedral was built in 1028 and over the years, additions were made to the church. In 1562 the roof and one wall collapsed resulting in substantial renovations in the following years. As we wandered around, we saw the tomb of the second Earl of Pembrooke (aka Strongbow), magnificent stained glass windows, a little monkey built into the décor, a fantastic quire (where Handel’s Messiah was performed for the first time ever in 1742) and a gorgeous nave.

From the main floor, we ventured downstairs to the Crypt where we saw a variety of monuments, manuscripts and the quirky mummified remains of a cat and a rat that were found in the church’s organ. What I wanted to know is why didn’t anyone hear the cat scratching and meowing once it was caught in the organ. Weird.

Anyway, our self-guided tour turned out to be great fun.  (And Cheryl and I found Christimas ornaments.  Still haven’t been shutout of a country – yes I did find one in Bolivia and already had one in Peru.). Anyway, the only site we were not able to see was the heart of Lawrence O’Toole, the former Archbishop of Dublin, which was apparently stolen from the church in 2012 and recovered only recently. Cheryl and I kept going back to the site where the heart was supposed to be located, but we could not find it. (I did see a picture and it appears the heart is stored in a small heart shaped black iron coffin.)

We left the church and our lovely tour behind and went on the hunt for a restaurant for lunch. We settled on a seafood restaurant that was quite good. I had a lobster roll, Donnie had fish and chips and Cheryl had a massive crab salad. (Donnie thought his fish and chips from yesterday were better though although we all agreed the chips at this restaurant were much better.)

Anyway, our next stop was the Dublin Castle, which until 1922 was the seat of the British government in Ireland. Unfortunately, I think the best I can say about this tour was that the Chapel Royal was lovely, because our tour guide was simply awful. She droned on about irrelevant issues, repeated herself over and over again and left us standing in a tiny room that was so hot and humid I almost walked out on the tour. After giving us a far too lengthy history of the castle in this horrid room, the guide finally let us go downstairs and see original portions of a corner tower and foundation of the castle. Fortunately for us, the area was lovely and cool.

After the rough start, we toured the Chapel Royal, which contained magnificent carvings and lovely stained glass windows. The light in the chapel was really lovely and made for some very nice pictures.

We ended the tour in the State Apartments where the tour guide once again went off the rails and rambled on about issues that were completely irrelevant to the actual rooms we were visiting. We ended the tour, 15 minute over the 60 minute allotted tour time, in St. Patrick’s Hall, which was the site of the state dinner for Queen Elizabeth II during her historic 2011 visit to Dublin. All in all, the tour was painful.

Our day concluded with a visit to the Guinness Store House, the site of the world famous Guinness Brewery. We wandered around on a self guided tour of the massive complex visiting the various floors containing displays that tell the story of how the Guinness beer is brewed and sold beginning with the barley process, to taste testing, to various advertisements over the years. We ended the tour on the top floor of the building in the Gravity Bar where we were afforded a 360 degree view of Dublin as well as a complimentary glass of Guinness Beer. Unfortunately, it was a Saturday afternoon and the place was jammed to the rafters.

We decided to go down two floors to the food floor where where we found some seats to rest our weary feet. It had been a looooong day, but we saw a number of the major sites in Dublin and had a really good day. After the beer, we hailed a cab and headed back to our lovely little Bed and Breakfast. It was time for some major rest.