We left Sheki just before 9:30 a.m. heading south and then east to Ganja, my final destination in Azerbaijan before I cross the border into Georgia tomorrow. The drive south took us out of the Caucus Mountains, through farming communities, dry desert areas and a couple nice little towns. While the scenery was nice, there wasn’t a heck of a lot to see unless you like sheep, cows and mountain lowlands.

We reached the Ganja gates close to noon. The gates were made of brick and were simply huge. The gates were rebuilt in 2014 and replaced iron gates that once occupied the site, but were removed in an attack by Georgians in 1139. The original iron gates apparently still exist and can be seen in Gelati, Georgia. (I will be on the lookout for the gates since I will be visiting Gelati on my trip through Georgia.) 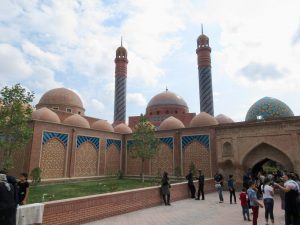 After a quick stop to view the gates, we drove through the gates and turned off the freeway to the right to visit the Imanzade Complex, including a mausoleum and Goy Imam Mosque. The big attraction at the complex was the mausoleum that is said to contain the grave of Maulana Ibrahim, son of the 5th Shiite Imam, Muhammad al-Baqir, whose grandfather was the prophet Mohammad. Apparently the young Ibrahim gave his life trying to overcome the forces of darkness and evil (i.e. male relatives) who were not following the Koran. The men ultimately killed the young man. Each September, Muslims commemorate the death by attending lectures and visiting the mausoleum.

Now this last fact was not something I was aware of when we arrived at the site to MASSIVE hordes of people. Yikes. We considered whether to enter or not, but I said what the heck. So I donned a scarf and we entered the complex and were immediately met with the loudest sermon possible going on outside the converted mosque (the building used to be a caravanserai). The guy with the mic was trying to whip up the crowd waiting in line at the mausoleum to “feel” the sacrifice of young Ibrahim. It was the epitome of “fire and brimstone” and while I could not understand a word, there was no mistaking the intensity and desire of the guy with the mic.

Anyway, we wandered around for a bit while I was met with continuous stares. Quite frankly, at this point, I wanted to leave, but my curiosity got the better of me as to what all the fuss was about regarding the mausoleum and so I decided to join the long line of faithful trying to enter. Fortunately, Javid worked his magic and I was taken to the front of the line. After about 10 minutes of waiting, I was finally permitted to enter with a group of women. We walked through an arch and into a very small chamber where a coffin like box sat. All the women around me immediately put their hands on the box, while I was quite frankly was more interested in looking at the top of the dome, which dates to the end of the 14th or beginning of the 15th century while the structure around the box dates to the 17th century.

Once we passed through the chamber, I exited the other side, but half way out I realized I was supposed to back out with the rest of the ladies so I quickly turned around and made my way out. I was able to snap a couple quick pictures before Javid and I hustled out of there.

We immediately left the facility much to my relief. It was awkward to say the least with the constant yelling from the guy with the mic and the continuous stares at me by a number of people. At any other time I am sure I would have really enjoyed the site, but given that the faithful were there not to visit but to worship I felt completely out of place. In addition, I have noticed that the last two towns we have visited, Sheki and no Ganja, seemed to have a different vibe. Less women visible. More clusters of men. More conservative atmosphere.

Anyway, we hit the road for our next destination Lake Goygol which means Blue Lake. Now I had no idea how far away the lake was, but as it turns out, the lake is located in the Goygol National Reserve about 50 km from Ganja. The drive took us up into the little Caucus Mountains and as we drove higher and higher, I kept wondering where the hell is this lake and it better damn well be worth it. After about an hour, we finally reached the park entrance, which was located 1,550 meters above sea level. And of course with the altitude came cloudy, foggy weather. I kept thinking there is no way I am going to see anything.

Now the crossing into the National Reserve was rather strange. I had to provide my full name and pay a park fee and as the gate was lifted to permit us access there were Azerbaijani soldiers everywhere. It turns out that the National Reserve divides Azerbaijan and its persona no grata neighbor, Armenia, so there was a heightened sense of alert everywhere. We passed barbed wired fencing and long plastic roping that clearing indicated do not enter. Javid said all the precautions were to also ensure that no one camped in the area, littered or started campfires, but that didn’t sound right to me.

Anyway after another 7 km, we reached the walkway to the lake. It turns out that we had to walk another 1 ½ km to reach this lake. So as we walked first up hill and then down hill, Javid told me story of how the lake was created. Apparently an earthquake centuries ago diverted a river with falling portions of the mountain damning the river creating the lake.

As we reached the bottom of the hill, I finally saw the lake and all I can say is HUGE disappointment. The lake was fogged in. I could barely see the trees and hillside across the lake and the beautiful blue colour that Javid had told me about was nonexistent. Ugh. From my perspective, a complete waste of 2 ½ hours. (Javid did point out that with my being from Canada and living in the Pacific Northwest the bar for lakes from my perspective may be much higher than others. Fair point.)

After about ten minutes at the lake (seriously), we ended up walking back up the hill to the van to find that there were two stranded women who wanted a ride to the park entrance. No idea what the issue was, but Mahir had offered them a ride, to which I, of course, had no objection. The weird part is that when the ladies got into the van with me, I said hello and the two women said nothing back. In fact, the two women did not even acknowledge my presence the entire 7 km ride back to the entrance. Weird.

We made the lengthy drive back towards Ganja, stopping twice to look at early century Caucasian Albanian churches. We were also slowed by rain and farm animals in the road. We decided to stop for some lunch along the way and I had chicken kebabs and salad, which turned out to be pretty tasty. After the late lunch, we finally reached downtown Ganja at around 5:00 p.m., checked me into my hotel and began a walking tour of the sites in downtown Ganja.

First up was the 17th century hammam, Juma mosque and madrassa that were directly In front of my hotel. All of the buildings were made of brick with the Juma mosque aka Shah Abbas Mosque having been completed in 1606.

The two minarets that top the madrassa were apparently added in 1776. Now a cool fact about the hammam and the mosque is that there is an underground passageway that connects the mosque to the hammam and was put there at the instruction of the Shah so he could soak and then pray (seriously).

I was able to take a quick peak inside the mosque (even though it is a male only mosque) since there was no one inside. The minbar (i.e. the staircase like pulpit) had a roof on it and is apparently only one of two in the world. The “roof” on the minbar was fashioned after the Shah’s hat.

After the trip to the mosque, we wandered down the tree lined plaza and across the street to the Alexander Nevsky Church, a Russian Orthodox church built in 1887. The church, like so many of the other buildings in Ganja was constructed of red brick and was hidden down a little alley. I don’t think I would have noticed it or found it on my own.

I wanted to take a look inside, but a service was underway. After some coaxing, a nice lady let me take a look inside provided my head was covered and I did not take any pictures. Unfortunately, I did not have a scarf with me so I took off my sweater and covered my head and stepped inside. I could only see three parishioners standing in front of me. (There are no pews in a a Russian church. Everybody stands.) The inside was pretty typical of a Russian church, with a dome, blue paint and lots of icons (gold plated pictures of important figures in the church). The priest at the front of the church was holding a silver urn filled with smoking incense and was rocking the urn back and forth while a female soloist sang a hymn. It was all quite lovely.

After the smoke became to much for me, we left the church and wandered down the street to the “Bottle House”. The Bottle House is a two-story bottle house constructed in 1966 by Ibrahim Jafarov, who built the house in memory of his brother who went missing in World War II. The house is made from beer, champagne, wine and water bottles of varying shapes and sizes as well as colourful stones transported from Sochi. There were apparently 48,000 bottles used in the construction.

We then began the trek back to the hotel. On the walk back we passed one of many statutes of Nazami Ganjavi, a famous 12th century poet in the Islamic world who was born in Ganja, as well as numerous fountains in the park square. We also passed a relic of the Soviet era, the massive city hall that stretched well over a block.

When we reached the hotel, I decided I wanted to go across the street and check out the Ganja mall. Ten minutes later, I was returning back to the hotel. Nothing but clothing stores and shoe stores. Zero variety whatsoever. I ended up joining Javid and Mahir for some tea before turning in. Tomorrow it was off to Tsbilsi, Georgia.