Today we were doing a driving/walking tour of Yerevan, the capital of Armenia. Yerevan is one of the oldest continually inhabited cities in the world with the original settlement dating to the 8th century B.C. Yerevan has seen its fair share of invasions over the centuries and has seen its star shine brightly only to later decline. Since the 20th century when Armenia became part of the Soviet Union, Yerevan has experienced a renaissance and is now the the center of government, the arts and the economy in Armenia.

As we drove around the city, I was struck by how green the city appeared with lots of tree lined avenues and city parks. Another factor that made the city so attractive is a height restriction implemented on buildings. No building is higher than 6 stories because Yerevan sits in a highly active earthquake zone. Because the last earthquake toppled so many buildings, the height restriction was enacted and continues today despite new engineering and technology to make buildings safer. The result is a very attractive city.

We began our tour by driving to one of the highest points in the city, the Mother Armenia Monument that replaced a Stalin monument in 1962. The monument stands 51 meters high including the platform and dominates the Yerevan skyline and the view from the monument is spectacular with Mt Ararat framing the city.

Behind the monument is the Mother Armenia Military Museum that is dedicated to Armenia’s participation in World War II. However, today, a majority of the museum is dedicated to the Nagorno-Karabakh War of 1988–1994 between Armenia and Azerbaijan. To this day, the neighbors have no diplomatic relationship and there are occasional flare ups over the disputed Narorno-Karabakh region. (Armenia claims it is their historic land and Azerbaijan claims that the land was turned over to them during the Soviet era. Armenia continues to control the land.)

The museum contained displays of weaponry and pictures of “martyrs” (those who gave their life in the war). There were also maps displaying the disputed territory and personal artifacts from soldiers.

After the museum visit, we drove to the Cascade Monument and Stairs that includes the Yerevan’s Center for the Arts. The Cascade Monument is built into a hillside and includes 572 steps with a series of tiered gardens and fountains. Inside the Center for the Arts, each floor was built into the hillside and features different art exhibits. We wandered down the staircase and periodically walked into the art museum to take in some of the exhibits. The tiered gardens and fountains were absolutely beautiful in the brilliant sunshine.

At the bottom of the stairs, we walked through yet another garden that was filled with street art. There was a large penguin, a cat, a naked woman and a lion to name a few. And the garden was surrounded by lovely cafes and apartments. Apparently in the summer time, the area is filled with people in the evening when summer concerts take over the area.

Nour picked us up after the walk down the stairs and through the park and drove us to our next stop at the Mesrop Mashtots Institute of Ancient Manuscripts aka the Metenadaran, a research institute for ancient manuscripts and a museum housing the largest compilation of Armenian manuscripts in the world. Now, I was not expecting much of this museum, but once again, my expectations were far exceeded.

Once Diane and I entered the building, I was quickly turned over to a museum guide who gave me a one hour tour around the floor that is open to the public. The manuscripts on display covered everything from theology (lots of copies of the New Testament), philosophy, history, medicine, literature, art and history. Now this may sound pretty boring, but the manuscripts were actually really fascinating. Most of the manuscripts were handwritten and accompanied by hand painted pictures. The manuscripts covered the centuries with some as old as the 4th and 5th centuries and others more “recent” such at the 17th and 18th centuries.

The manuscripts that were most fascinating were the manuscripts that described ancient medicinal recipes, recipes used by the Armenian royal families for perfume and elixirs, the first book of Armenian civil laws and a book called the Book of Lamentations” of St. Gregory of Narek. Now the guide told me there are five sections in the book and that the book makes clear that sin and rebellion result in God’s wrath. As a result, “lamenting” is appropriate when you perform misdeeds, but it should quickly give way to contrition and repentance. Now the form of contrition and repentance that was used during ancient times in Armenia was to write out the Book of Lamentations. In fact, there was on display an example of a young man’s contrition and repentance by his hand written Book of Lamentations. And I don’t know why I got such a kick out of this, but it just seemed hysterical that writing out of book is sufficient forgiveness. It seemed like the old school discipline of filling a chalk board over and over with your repentance … “I will not put Suzie’s hair in the ink well”. Anyway, I thought it was funny. 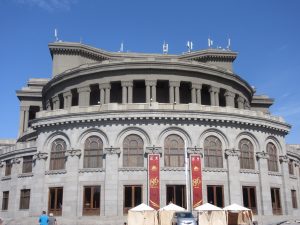 After the trip to the museum, Nour dropped us off near the center of the city for a walk to some of the notable buildings in the city. First up was the Armenian National Academic Theatre of Opera and Ballet, which was surrounded by tents that were being put up for the upcoming Francophone Festival (Armenia and France have a long friendship and the festival commemorates that friendship. In fact, the Prime Minister of Canada will be attending the festival next week when I am back in Yerevan.)

We then wandered through the adjacent park and past an old Soviet movie house before stopping for some ice cream. We continued on passing new apartment buildings, chic restaurants and store fronts before ending up in the main square in Yerevan, Republic Square. And like the Opera and Ballet House, the area was in full construction mode as a stage was being built right in the middle of the square for the Francophone Festival.

After the walk, Nour picked us up and took us to Tavern Yerevan, a traditional Armenian restaurant for lunch. Now, unfortunately, Armenians’ idea of lunch is my idea of a massive dinner. We were served three types of salads, a plate of four different cheeses, two types of bread, a bowl of soup, doma (minced meat rolled in grape leaves), qyufta (a minced meat cut in slices) with bulgar and mushrooms and baklava (rather different than Turkish baklava made with dried fruits and virtually no honey) and Armenian coffee. YIKES! It was all absolutely delicious, though I was once again left lunch knowing I would not eat any dinner.

The drive took across the Victory Bridge, past Hrazdan Stadium, Sports and Concert Center to the park housing the genocide complex. As we got out of the car, somber classical music played over an unseen intercom and followed us all the way down the stairs and into the museum.

Now the Armenian Genocide occurred when the Ottoman government (i.e.Turkey and nations under its control) began a systematic extermination of 1.5 million Armenians who lived in Western Armenia that was part of the Ottoman Empire. Most most claim the genocide began on April 24, 1915 when Armenian intellectuals and community leaders living in Constantinople were rounded up, arrested, and deported from Constantinople and murdered. However, others claim (and the museum showed) that the genocide actually began in the 1890s. The genocide involved the killing of the male population through massacre, army conscription and forced labor. Later, women and children were rounded up and led on death marches to the Syrian desert. The younger, more attractive women were forced into sexual slavery and branded like cattle to denote their “owners”. The large Armenian ex-pat population throughout the world arose as a direct result of the genocide.

Now I have been to two other genocide museums (the Holocaust Museum in D.C. and the Rwanda Genocide Museum in Kigali). And like those two museums, the Armenian Genocide Museum pulled me in, brought me to tears, made me angry, and made me sick to my stomach. The history that played out before me via pictures, stories and Diane’s information was gut wrenching, horrific and all consuming. By the time we finished walking through the exhibits, I was exhausted. The pictures of the murdered children and of the women with tattoos on their faces denoting they were owned by someone, made me sick. I cannot begin to describe the sadness I felt that people were capable of such inhumanity.

We climbed the stairs to go outside without saying much and then walked the length of a football field to the memorial and eternal flame. We walked down the steps into the memorial while the same somber music played. After a few minutes at the memorial, we walked back up the stairs and past a stone memorial that listed all of the villages that were exterminated during the genocide. It ran the entire length from the memorial to the museum. It is beyond my comprehension how such depravity can exist.

We left the complex and drove back towards the main part of the city in relative silence. Eventually, I shook off the gloom and tried to enjoy the ride through the lovely streets of Yerevan. The drive took us past the Presidential Palace and the National Assembly Building to our last stop of the day, the GUM Bazaar.

Now the GUM Bazaar is where locals go to buy fish, fruit and produce, but perhaps more importantly, to buy their dried fruit. Yep, Armenians love their dried fruit. Now me … not so much. However, I thought I would give a few a try. The stand we stopped at offered me dried apricots (tasted and uh no thanks), two different varieties of dried plumbs (tasted and uh no and no), three different types of dried figs (tasted and yes on the first and ugh no way on the next two) and finally a dried peach filled with some kind of nut and honey mixture (tasted and it was yuck). So I ended up with a few dried figs and called it good.

As we wandered around, I came across a woman selling three different kinds of pistachios imported from Iran. Now the best pistachios I have ever tasted were yellow shelled pistachios I bought in Tehran. One of the kinds of pistachios the lady was selling was the yellow shelled pistachios so I gave a couple a taste and while they were not the complete awesomeness of the pistachios I purchased in Tehran, they were a very close second. So with purchase number two in hand, we left the bazaar and headed back to my hotel. Tomorrow we leave for the disputed region of Narorno-Karabakh where I will spend three days before we drive back to Yerevan.