Today was a light day being Sunday. As a result, Diane suggested we drive back to Shushi and drop in on the mass at Ghazanchetsots Cathedral, the church we had visited the day before and the main church in the region. Now as most know I am not a religious person, but the chance to see an Armenian mass (or at least a bit) with the beautiful choir voices was too much to pass up so just after 10:00 a.m. we drove back to Shushi for the 11:00 a.m. mass.

When we entered the church, there were already a number of elderly women sitting in the pews (yes unlike Georgia and Russia there are pews in Armenian churches). We took a seat and within minutes, I had drawn the attention of the elderly ladies. One woman sitting in front of us turned around and handed me an “icon” (a card with a religious picture) and moments later a lady from the other side of the church handed me two more. If this kept up, I would have a full deck. Fortunately, the gift giving ended because the pastor and young children in robes began to light candles. This, I learned, signaled the beginning of the pre-mass service (sort of like a pre-func).

There were some chants and ritualistic lighting of candles and the head pastor (there was more than one pastor) came out and said some prayers, which was followed by a lot of kneeling and praying. Once this was over, the bells outside began to ring signaling it was time to come to church.

When the mass began, the main pastor came out in blue robes and a large decorated hat followed by the lesser pastors and the children dressed in similar blue robes carrying candles. At this point, we had to stand and stay standing. There was some recitations and prayers followed by the head pastor leading the other pastors and children up to the top of the alter in the front of the church. While this was going on a young women’s choir began to sing. Now this was actually the best part. Their voices were absolutely beautiful.

Once the pastor led group was standing on the alter, there was a lot of chanting, waving of the incense holder that was producing a lot of smoke, followed by some prayers and more of the choir. Then the head pastor came down the stairs and led a parade of sorts around the interior circumference of the church. It was at this point that we had to put some sort of incense pellets into the incense burner (handed to me by a woman In front of me) as the head pastor walked past us. As this was going on, the women’s choir was singing. At the end of this portion of the program, I told Diane I was ready to leave. No idea what followed, but as we were leaving one of the other pastors began to read scripture. And I was told this would go on until at least 1:00 p.m. Yikes. It was only 11:30.

Anyway, after the appearance at the service we made a stop at the well known “We Are Our Mountains” monument on the north side of Stepanakert. The volcanic stone monument, which was completed in 1967, depicts the head of a woman and a man also know as “Tatik-Papik” (Armenian for Grandma and Grandpa). The monument is the symbol of Armenia’s relationship with and heritage in Artsakh. And yesterday, while at the local museum, the young guide told me that the reason only the head of Tatik and Papik were visible is because the rest of the body has roots in this land so deep that only the head of each can be visible.

We walked up the little hillside to the monument and took a few pictures before continuing on our one hour drive to our only other stop of the day, the Gandzasar Monastery. Now the Gandzasar Monastery dates to the 5th century and represents Armenia’s centuries old relationship with Artsakh. The main church in the monastery is the St John the Baptist Church, which dates to the 13th century. The church holds many relics from St. John the Baptist, including, what many believe to be, the head of St. John the Baptist buried below the altar. The church came under attack during the Azerbaijan-Armenia war in the 1990s. Remarkably, the church withstood attack and only sustained minor damage that has since been repaired. Many attribute this good fortune to St. John the Baptist. 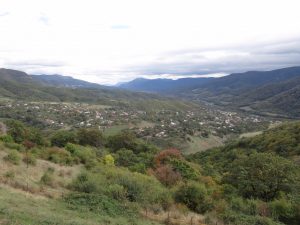 Our drive to the monastery took us through rolling hills and farmland and finally up a steep hillside. We reached the site just after 1:30, and I was immediately impressed with the beautiful carvings on the exterior of the church dome. In addition, the monastery sits high on a hillside and afforded fantastic views to the little village below.

We walked into the church’s antechamber (the area outside the main hall of the church) past the usual tombs of former bishops from the church and a number of khachkars (Armenian carved stone crosses) leaning up against the wall. When we entered the church, the first thing that struck me was the amazing carved alter that dates to the origins of the church. It was an intricate hand carved design made of stone and remarkably well preserved.

We wandered around the interior of the church before heading to the outside to see some of the damage that was inflicted on the church. The first thing Diane showed me on the far side of the church was a number of bullet holes from the Soviet era. Apparently when the Bolsheviks invaded Armenia in the 1920s, they lined up all the bishops against the wall of the church and shot them. Not a pretty picture.

We then walked to the back side of the church where Diane showed me a gapping hole where an unexploded Azerbaijan bomb was lodged into the wall. The Armenians removed the ordinance, but left the hole as a symbol of the good fortune the church retains.

The last damage Diane showed me was an Azerbaijan ordinance that had been propelled into the church, but failed to inflict much damage. The ordinance remains imbedded in the wall where it landed. Yikes. Neither Diane nor I touched the ordinance, but were told that it was harmless. (Yea sure ….)

Anyway, after the trip to the monastery we drove back down the hill and stopped for lunch at a quirky little restaurant overlooking a small river. Right before we reached the restaurant we passed a series of old Soviet cars that had been put on pedestals for show. Seriously. And as if that was not enough, directly across the road from the restaurant a massive lion head and paw had been carved into the hillside. Like I said, quirky.

Lunch was OK, not the best of service, but the interesting part was that we were joined in a little room, where we were eating lunch, by a family visiting their son who in the army. Two years of military service is mandatory for all Armenian boys and most of them end up stationed in Artsakh. On weekends, families come to visit their sons. Yesterday we saw families with military boys over Stepanakert, and apparently twice a year the government pays for families to visit their sons. Nice.

Anyway, after lunch we drove back to Stepanakert and were done for the day by 4:00 p.m. Tomorrow we leave Artsakh and head north to the lake area in Armenia and some warmer weather.