This morning we had a later than usual start. Part of the reason was that the lovely little boutique hotel in which we stayed in Dilijan did not begin serving breakfast until 9:00 a.m. The other reason was that we were going to visit the old town of Dilijan and the shops did not begin to open until after 10:00 a.m.

So after breakfast, we left the hotel and drove the short distance to old town Dilijan. The buildings are made of lovely stone and were designed with the intent of preserving the local historical crafts, including woodworking and pottery. We walked from the main road down the staircase to a little walkway where various shops were located and with craftsmen at work. We spent the most time in a pottery studio where the potter had on display some beautiful bowls as well as several ornaments. I made a few purchases and called it good.

Nour then met us at the end of the walkway and we were off to our next stop, the lovely Haghartsin Monastery built high up on the hillside about a half hour from Dilijan. The Monastery was built between the 10th and 13th centuries at the order of two princes from the Bagratuni kingdom, which ruled much of the area around Dilijan. The remaining notable buildings at the monastery consist of three churches, the refractory (dining hall), and the remains of a walnut tree that was planted when the first church was built. The monastery is on the list to be included as a UNESCO world heritage site.

The drive took us through a densely forested area where we saw villagers by the side of the road picking up walnuts that had been dropped from the trees along the road. Just before we reached the monastery, Nour stopped the car and we hiked up a tiny hillside for a wonderful view of the monastery, which looked like a fairy castle nestled in the woods. And double bonus: we walked past the ruins of the medieval town of Haghartsin with crumbling stone buildings framed by pieces of broken Khachkars, as well as walking to the partially constructed Soviet ropeway (chairlift) that provided massive views of the mountains and valley below.

Once at the monastery, we first visited the refractory, which was built in 1248. The hall had two domes that had been restored and beautiful arched columns. The floor had been entirely replaced under a recent renovation, but the room still retained its original character.

We next visited St. Gregory’s church built between the 10th and 11th centuries and was the oldest building at the site. Like all Armenian churches, the church had an outer entryway that was built int he 13th century with a mausoleum for the former bishops of the church and members of the royal family. Significantly, the brothers who constructed the monastery had their own mausoleum adjacent to St. Gregory’s church.

The most interesting part of St. Mary’s church for me was the incredible bas relief carvings on the exterior of the church, and in particular on the south back wall. The carving depicted two men in monks’ attire who point with their hands at a model of a church and a picture of a dove with half-spread wings placed between them. Very unusual and nothing like the other bas relief carvings I had seen to date. 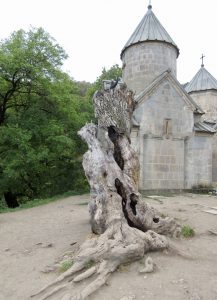 We also visited the remains of the walnut tree that dates to the 10th century. Lightning strikes and old age have taken its tole, but Diane told me the tree remains alive. And as is tradition, I made a wish, walked three times around the tree and then squeezed through the hole in the tree on the right side. It took a bit of limbo action, but I made it.

We then drove back to the main road and headed further from Dilijan to the Goshavank Monastery founded in the 12th and 13th centuries by lawyer and all around brilliant human, (he earned at least two doctorates and wrote the first book of Armenian Civil Laws which I saw at the manuscript museum in Yerevan), Mkhitar Gosh. The monastery sits in the middle of the little village of Gosh and is not surrounded by the usual ancient walls. Right outside the entrance was a statue of Mikhitar Goshe and I hoped that by buddying up to the statute, some of his brilliance might wear off on me.

We first visited St. Mary’s church. We walked through the outer entryway (which had been converted into a church shop) and up some stairs to the main portion of the church. Now this church was highly unusual because scripture had been inscribed on the stone walls on either side of the nave and under the topside of the dome. The scripture, Diane informed me, was the Ten Commandments. No subtlety here.

We then walked next door to see the St. Gregory the Illuminator church completed in 1241. This church had lovely designs carved into the stone walls as well as the columns framing the nave. Outside the church doors was a khackhar known as “Aseghnagorts” dating to 1291. It was intricate and deserving of its name, which means needlecarved.

The last church we visited was the tiny St. Gregory Church completed in 1241, and I found that it was notable because it had a niche that was carved in the shape of a mosque. I suspect this was done to appease Muslim invaders who were routine during the 13th century.

We wandered around the backside of the monastery where other buildings were under construction before we got back in the car and began the drive back to Dilijan for lunch. Now while the trip to the two monasteries was really lovely (and I especially loved Haghartsin nestled in the mountains), the star of the day and maybe the trip was this lunch.

As we drove to Dilijan, I was talking about my favourite lunches on my trip to date and we were all laughing that my favourite meals all seem to be preceded by some extensive climbing or walking. So in an effort to ensure the lunch would make my top list, Nour parked at the bottom of a hill so we had to climb a series of stairs to reach Kchuch Restaurant. And I am hear to say, I would have recreated the July hike up the mountain in Peru at 11,000 feet to see the Incan burial ground if it meant I could have lunch at this restaurant again.

First, the setting was lovely. The restaurant is about four years old tucked away off the road and into the hillside and built with massive windows all around.

Second, the food was lights out fantastic. The first course was a salad of tomatoes and cucumbers, a cheesy dip of sorts you scooped onto romaine lettuce leaves and topped with croutons (and yes it tasted just like a Caesar salad) and finally bread with a spicy red pepper dip (agigo), hummus and a dip made of greens, olive oil and garlic that was unfreakinbelievable. I could not stop eating the cheesy Caesar salad dip, the agigo and the green dip. I was addicted to all three.

The second course was spicy chicken wings, with a sauce that left me smacking my lips, and served with grilled potatoes. The wings were some of the best wings I have ever had. The third course was lahmajoon aka Armenian meat pizza. Now this pizza had the thinnest crust you have ever seen and was covered in meat and sauce. The only way to eat it was to fold it and chow it down. The pizza was spicy, but not too spicy. I could have eaten that Armenian pizza all day long. And if all of this were not enough, we ended with barbecued chickens kabobs with peppers and tomatoes that were equally delicious.

When the proprietor came over and asked me how the meal was, I asked him if he knew what baseball was. He wasn’t sure so I gave him a one minute version and then went on to explain that the best a hitter can do when at bat is a home run. I then told him, the meal was a home run. He immediately understood the analogy, got a huge grin on his face and thanked me. And quite frankly there was no need to thank me … the meal was superb.

After the love fest with Armenian food, we began the drive back to Yerevan. We once again passed through the 2.5 km tunnel and Lake Sevan before taking a side road to Tsakhkadzor, a ski complex constructed on Mt.Tegenis under the Soviets. In fact, when Armenia was part of the Soviet Union, Tskhkadzor had a massive sports complex here where Soviet Athletes would train for the Winter Olympics. The ropeway (chair lift) operates year round so I was going to take the lift to the top and back for some spectacular views.

And fortunately, I was not disappointed. The views were lovely as I was taken higher up through the autumn coloured trees. Once at the top, I walked around a bit, turned down a guy who wanted me to pay for a horse ride further up the hill to see Mt. Ararat and then took the lift back down. Now the ride down was the real payoff. The views to the villages and valley below were beautiful and add to that the fall colours peppering the trees and it really made for a lovely ten minute ride to ground level.

Once I met Nour and Diane, we drove to the main road and were back in Yerevan in about 45 minutes where they had me checking back into my lovely hotel near Republic Square. Tomorrow we were going to Echmiadzin, the Holy See of the Armenian church (sort of like Vatican City) and after lunch we were taking in the Vernisaage market, the largest arts and crafts market in the Caucus region.