So today was a light day for me. I only had a food tour scheduled at noon so it was lovely to sleep in and have a late breakfast. The weather has drastically improved since the massive storm on Saturday and intermittent storms the past two days. I actually saw sunshine on my deck this morning (and the weather would continue to improve throughout the day).

So the food tour I was taking was billed as a “Parilla Tour”. A Parilla is a restaurant featuring a charcoal grill on which meat (and lots of it) is cooked. The tour was centered around the Las Cañitas section of Palermo. We would be visiting three restaurants and one heladeria (ice cream shop).

Anyway, at about 11:45, I grabbed a cab and headed to La Cañita” Parrilla the meeting point for the food tour. Now I had been told via email that I was the only one who had signed up for the tour and that was a bit of a disappointment because any time you are on a food (or wine) tour you want to have a group with whom you can socialize. So it was a wonderful surprise to find when I arrived that an Australian couple (who happened to be recently retired lawyers) had signed up for the tour. And if that wasn’t enough, we were joined by three young guys from … Seattle. What are the chances of that?!

Now the first food we would have today was a choripan. These little sausage sandwiches are sold all over Buenos Aires and are incredibly popular at the football matches. You can have pork sausage (most common), a combination of pork and beef sausage (less common) or beef sausage (least common). We were going to have beef choripan.

And I had seen these little sausage sandwiches being sold all over the place, but had yet to try one. German explained that folks in Buenos Aires do no like their food spicy so although the name of the little sausage sandwich has “chori” in its name, we should not expect any spiciness like chorizo sausage. And German was 100% correct. In fact, I thought the sandwich was a tad bland so I added some chimi churi sauce to the sandwich and this little kick of spice drastically improved the sandwich. Turned out to be very, very good.

After the choripan, our little group walked about four blocks through the leafy, green neighborhood to Las Cholas, another parilla, where we would be be eating beef empanadas. And this time, we would be drinking wine with our food. Unfortunately, the restaurant was out of Torontas wine (that fabulous white wine Tom and I had in the Salta region) so we ended up having Sauvignon Blanc. The wine was OK, but after yesterday’s fabulousness in Uruguay, this wine was definitely a step down.

Now the beef empanadas we would be eating would be made in the Northern Argentine style, meaning that the empanadas would have more spice than what would normally be found in Buenos Aires. And I have to say when the empanadas came out and I took a taste, I loved the flavor. There was just enough spice in the meat so it made it unnecessary to add any sauce to spice up the flavour. The empanada definitely reminded me of some of the empanadas I ate when we were in Salta. Really, really good. 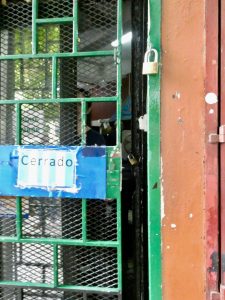 We then walked several blocks along the very pretty tree lined avenues to the restaurant where we would be having our main course of the day: Tito’s Secret Parilla. And quite frankly, the restaurant really is a secret, known only to locals. If a tourist were walking down the street there is simply no way that the tourist would know a restaurant exists behind the brightly coloured door with the “Cerrado” sign (Spanish for “Closed”) on the doorfront.

German rang a little bell buried on the side of the door frame and a woman appeared and slid the wrought iron door open. And low and behold, there was a two story restaurant in full operation behind the heavy iron door. At the front of the restaurant was the charcoal grill doing its thing with a myriad of meats, and all around the first floor were little tables where people were eating lunch. The restaurant has been in existence since 2004 and virtually no one but locals frequent the establishment.

We were escorted upstairs and seated. Almost immediately, the waitress brought out a bottle of Malbec to enjoy with the meal and the wine turned out to be really good. And of course, our lunch time appetizers continued with proboleta being served. Proboleta is a form of baked cheese. The cheese is super salty and quite rubbery until it is bakes and then becomes quite tasty. And I have to say it was surreal eating an entire pie shaped piece of cheese. However, the cheese was probably my least favourite food of the day.

Then it was time for the main course (with a little leafy, green salad and cheese thrown in to make us feel better about the massive amount of meat we were going to eat). First up was the Beefa de Chorizo, a cut from the cow’s shoulder. This is apparently the favoured cut for Argentines because the meat contains a great deal of fat, which contributes to the flavour.

Now the weird thing was that the meat was served with all the fat trimmings. And this is done because the Argentines want to make sure the beef truly is fatty and hence tasty. Now while I found it weird to have to cut off all the fat from the steak, the cut of meat was exceptional. Tasty, melt in your mouth beef, which I of course topped with chimi churi sauce. Made it even better!

The second cut of meat we were served was skirt steak. Now I always thought skirt steak was a cheap cut of meat, but in Argentina not so. This meat tasted like butter. It was so tender I swear I could have used my fork to cut the meat. Another home run.

By now I was approaching my limit, but there was still one more stop to make. Argentines love their helado (ice cream) so we would be going to an artisanal “heladeria” (ice cream shop). We left the fabulous Tito’s Secret Parilla and walked around the block and back down the street to the area very close to where had started this food extravaganza. We then walked into the little shop known as Persico, an upscale ice cream shop started by some of the original founders of Fridos, probably the most popular ice cream shop in Buenos Aires.

German made some suggestions for choosing our two scoops, and I took him up on his suggestion of Dulce de Leche Casaro (homemade ice cream) and Dulce de Leche Granizado. (I always follow the guide’s suggestion as they always know.) My decision turned out to be a wise choice. I have a “bit” of a sweet tooth and this ice cream satisfied the need for something sweet to counter all the meat, and then some. Maybe the best ice cream I have enjoyed in Argentina during my three weeks here.

Sadly, our lovely little food tour had come to an end. The lunch had been absolutely perfect and the company was enjoyable. I tipped German and then said goodbye to everyone. I hopped into a cab and headed back to the hotel with the plan to simply hang out by the pool and spa for the day, and maybe take a nap after all the food!