Well today was one of the less exciting tours I have had since I began my trip. The day started off on the wrong foot when I change the battery in my camera and when I went to use it an hour later I received an error message. No matter what I did I could not get rid of the error message. So … (And I am sure this will delight my sister and Tom), it was back to the crappy camera. Fortunately, the day did not require any long distance shots so it all worked out.

Anyway, my guide Patricia, was supposed to meet me at 9:45, but half way through breakfast the front desk folks came and found me just after 9:15 to tell me the guide was already here. What the heck? I rushed through breakfast and went out to meet her. She said she likes to be early and thought I might be ready to go. Uh that would be no. And second surprise. We were supposed to be taking the scenic train to Tigre (at least that was what the tour summary read when I booked the trip). Instead, there was a driver, Martin, waiting to taking us to Tigre. This was not starting off well.

Nevertheless, once I grabbed my bag Patricia said we had some extra time before we needed to leave for Tigre and our trip to the delta so she suggested a quick stop at the Buenos Aires rose garden. The day was absolutely gorgeous so perfect for walking in gardens so fine by me. Finally, a positive.

So the rose garden is located not too far from my hotel in the Parque Tres de Febrero. The park is incredibly popular with the locals and has over 18,000 rose bushes surrounded by a lake and acres of parkland. The land once belonged to the former Argentine president Juan Manuel de Rosas. The rose garden was officially completed in 1914, but since that time, rose bushes, gardens and fountains have been continually added. 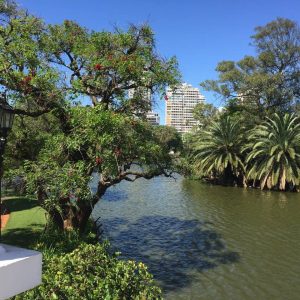 Once we reached the gardens, we walked through the garden of poets and this is where the camera issue arose. Try as I might, my damn camera would not work. So, I used the camera on my phone to take pictures, but that was not going to work for long since I was down to less than 50% of battery power. As a result, after we wandered through the rose garden (beautiful I might add), we drove back to my hotel to exchange cameras and … the crappy camera was back to work.

We then hopped on the freeway and drove 35 km to the little town of Tigre. Now Tigre was founded in 1820 and lies on the Paraná Delta and was a weekend and summer destination for the Buenos Aires elite. The wealthy built huge mansions along the rivers and little islands in the delta channels, many of which still exist. Today, Tigre and the delta has become a tourist and weekend destination for the average person.

Our first stop in Tigre was the “Puerto de Frutos” (fruit port), which is now a place for individuals to sell their arts and crafts. Only problem … most of the shops were closed. Apparently, many of the craftsmen only show up on the weekends, and those that were open looked to be selling junk made from China. Gesh. Why am I here?

The one cool thing I got to see was the men loading up boats with fruits, vegetables and water for the folks living on the islands in the delta. The homes are only accessible by water and there are very few shops in the delta. As a result, the homeowners put their orders in and the food and water (there is no drinkable water in Tigre or the delta) are delivered to them.

After the trip to the market, we went to meet the boat that would take us through the delta for an hour an half. Sturla Viajes was the company that would be taking us through the delta, but for some reason, I thought the boat would be much smaller. Instead it was one of those mass tourist boats that was far too crowded to enjoy the trip. We were one of the first on the boat and sat out on the deck. However, despite the signs that read no standing, a myriad of people decided to make it their business to block the views of those of us already seated. As a result, the only view I had was on my side of the boat and that only resulted from me twisting my head and body around so that I could see the view behind me. A VERY uncomfortable hour and a half.

Now what I could see was rather pretty. We passed rowing clubs, which are housed in gorgeous old mansions, old shipwrecked boats that are simply left to rust in the water since it is cheaper than hauling them away, people rowing and jet skiing and beautiful remodeled homes on the river banks.

The hour and half loop took us from Tigre up the Tigre River to the Rio Carapachay then down the Rio Sacramento to the Rio Lujan which then took us back to the Tigre River and the town of Tigre. And one thing I found interesting is that on some of the banks of the rivers were passed private clubs have been constructed with private sandy beaches. Now I took one look at the brown rivers and said there was no way I would swim in that stuff. Apparently the sediment in the river is filled with iron making the river brown … so they say. But I don’t care what makes the rivers brown, there is not a chance I would swim in that stuff. However, according to Patricia the rivers are full of people in the summer time. (I did not ask about the life expectancy of the people who swim in the rivers.)

Anyway, after the less than enjoyable boat trip, Patricia, Martin and I drove around the little town taking in the beautiful tree lined streets, parks and buildings.  We then stopped for, what else, helado (ice cream). We had decided to forgo lunch since it was super hot, I wasn’t hungry and I wanted to stop in San Isidro on the return. So helado it would be.

After the ice cream break, we made a quick stop at the Tigre Museum of Art, not to see the art, but to see the magnificent building and grounds. The museum is housed in the former Tigre Social Club that was THE place for Buenos Aires society when they made their pilgrimages to their Tigre homes. Eventually, when society lost their money, the club fell into disrepair so the town of Tigre rescued the building and grounds and it became a museum.

And I have to say, the building was one of the more amazing buildings I have seen for a museum. It had beautiful porticos, a high marble walkway and lovely gardens.We wandered around the grounds for a bit admiring the flowers in bloom along with the lovely views of the river. I would have been much happier if we had forgone the crappy boat ride and simply sat on the banks of the river with a glass of wine and some cheese. I think I would have seen almost as much.

Anyway, after the quick visit Martin drove back towards Buenos Aires this time along the back roads so that we could visit the little town of San Isidro. Now the interesting thing about San Isidro, besides the fact that many of Buenos Aires elite live in the area, is that the town is very, very Catholic. There are Catholic schools everywhere. And of course, since the town is wealthy and Catholic, it obviously has a massive cathedral which we stopped to visit.

Now the San Isidro Cathedral was built on the site of 1706 chapel. The cathedral was completed in 1898 and stands 68 metres or 223 feet tall. In fact, the Cathedral was so tall that I had trouble taking a picture of the thing. I kept having to move back.

Anyway, after the trip to the church, we continued the drive through the very green, leafy suburbs of Buenos Aires finally reaching my hotel just after 4:00 p.m. It had been a bit of a strange tour and not what I expected.

So after I said goodbye to Patricia and Martin, I caught a cab and did a little shopping downtown at the leather stores. Unfortunately, I have still be unable to find the leather placemats my friend Tom was looking for, which we saw in all the restaurants in Northern Argentina.

And after the shopping, it was time for my dinner at i Latina, The restaurant features Latin fusion foods. In other words, combinations of foods from all over Latin America, including Mexico, Columbia, Peru, Argentina and Brazil. The restaurant was ranked by TripAdvisor number 1 in Argentina, number 2 in Latin America and number 17 in the world.

When I arrived shortly after 9:00 p.m. (they eat VERY, VERY late here in Argentina), I was seated near the open air kitchen. I could not have asked for a better table because I could peer over the little bar and watch the goings on.

Now the menu was billed as a 7 course tasting menu, but in reality it was a 9 course menu with an appetizer preceding the first course and tea and coffee wrapping up after the 7th course. In addition, there were wines paired with every course. And I am here to say that this meal was perhaps the best meal I have ever had in my life.

The appetizers featured little samples of Argentina’s favourite apps, including a small empanada, and a Bunuelo, which is a little dough ball that had avacodo and a sliver of trout on the top served with a spicy sauce. Clearly my favourite.

The first course included salted beetroot, which I thought I would not like because I am not a beet fan, but this was incredibly tasty. The second course might have been my favourite with a coconut soup featuring prawns, fish and calamari. The third course was sweetbreads, which I was not excited about, but it was actually out of this world good. The fourth course was quail with a spicy sauce and Oaxacan mole. Yummy. And of course the fifth course featured beef. The sixth and seventh courses were deserts topped off with some amazing brewed tea. And of course the wines were outstanding. (The only one I was not fond of was the vermouth that was served with the apps. Too sweet for me.)

Anyway, I can’t even begin to describe the amazingness of this restaurant with possibly the best service I have ever experienced. Every time a course was brought to me it was described in intricate detail. The same for the wines. And every 10 minutes or so someone would come by to check on me to see if I needed anything. Simply brilliant. With only a couple days left of my sabbatical, it was a great way to wind up a great trip.