So most who know me understand my deep love for ruins, and in particular anything dating back a couple thousand years or more.  It was particularly tough to cancel my trip last year knowing I was missing out on the Roman ruins in Algeria and in Cyprus.

I had so hoped to be able to visit Cyprus this year to wander amongst history, but that was put on hold until Spring 2022.   Now while Malta has incredible history and some outstanding ruins I will visit next week, I had only recently learned that Malta has some Roman ruins and ancient Punic ruins in an area known as the Xemxija Heritage Trail in the northern part of the island near St. Paul’s Bay.  So … obviously I was not going to miss out on this.

After a little google research I found I needed to take bus 49 to St. Paul’s Bay and walk up the hill to the start of the “Xemxjia Heritage Trail”) .  Sounded easy and fortunately, it actually was pretty easy.

So I had an early breakfast and walked the familiar route to the bus station and waited for bus 49.  The bus arrived right on time (8:50) and we were soon winding our way through the marina district and eventually north to the coast.

When it came time to get off the bus at the Roti stop, the bus driver originally said I was getting off at the wrong stop, only to be overridden by other riders confirming this was the Roti stop.  (WTF???) Driver didn’t even know the bus route.  Gesh.

Anyway, once off the bus I saw the sign pointing up the hill for the “Heritage Trail” and set off on the VERY steep road, which took me to the start of the Roman road and the equally steep trail up.  (The websites I read had warned it was a pretty steep walk, but why are so many of the good sites around the world uphill???)

Fortunately, I had found a picture of a map on a website that allowed me to find most of the sites, fairly easily.  And while the trail was marked by some local folks who are interested in preserving the site, I had read that farmers and developers in the area had destroyed some of the signs and markers in a bid to prevent folks from visiting the area.  (Apparently farmers don’t like the tourists wandering around with some getting lost and crossing onto their property and developers want to build on the land.)  So I knew it might be a bit of a challenge to find all the sites, and as it turned out, I was right.

Now, the map I found showed 20 sites.  I was able to locate 17 of the sites.  Not bad.  But the one disappointment was not finding a beehive like corbelled hut.

Anyway, the hike up the old Roman road was pretty interesting.  I could see some of the original curbing and a trough beside the old stones to force rain water down hill.

There were old stone walls on one side of the road that were well preserved in parts and crumbles of rock in other parts.  I really didn’t care how well preserved the walls were, as it was just so cool to look at the precision which the stones were linked together without mortar.

The first site and perhaps the be preserved site was the apiary, Roman bee hives dating back over 2000 years.  The apiary consisted of little alcoves in which terra cotta hives behind the holes held the honey bees.  Part of the apiary had been restored while another part was in a bit of disrepair.  It was pretty awesome.

Close by the apiary was the first of a number of caves followed by a 1,000 year old carob tree.  The trunk of the tree was unbelievable.  As I was standing under the tree, I thought about how much sh*t that old tree had seen.  Just imagine.

And right across from the tree was an old burial cave along with the remains of a second apiary.  The walk then took me up a further hill before the area flattened out.  And here is where I got a little turned around.  The sun was so bright and there was no shade for me to be able to see the map (which was stored on my phone).  So I ended up taking a wrong turn and ended up following an old path.  Eventually I was able to right myself, find the little path off the main trail and locate the next site, a Neolithic temple, which was not in the best of shape.

Unfortunately, and as mentioned earlier, I could not find the old beehive shaped stone hut to save my life.  I wandered all over the place near the temple and … nothing.

From here, I rejoined the main path and followed the signs to a new path.  Now at this point, I had been wandering around for about 45 minutes and it was H.O.T. hot hot hot.  Fortunately, I brought lots of water and some granola bars, but I was still really, really hot.

Anyway, the next part of the trail was pretty flat so that made it a lot better for hiking.  Next up was a 5,000 year old Punic tomb with separate burial chamber.  I did not climb down into the hole to check it out so had to only take it in from above ground.

I then located the old stone farmer’s hut, which had been reconstructed from the original stones.

The farmers hut was higher up on the hill and adjacent to old Punic caves that are believed to have been used by ancient farmers in the area before stone buildings were in vogue.

Interestingly, the caves were used by locals during WW II from protection against the bombings fo Axis forces.

Outside the cave dwellings were two granary silos  used to store crops for the winter.  And it was here that I found that someone had burned the sign marking the granary silos.  So sad.

After the silos, I wandered through a lot of low lying brush and grasses to find the main path again.  In the process, I apparently missed another cave, but once on the main path, I decided I was not going back.

Anyway, a five minute walk along the path took me to the Roman baths, which were discovered in May 2000 while excavating the area.  It is believed that at some point in the 17th century, the buildings may have also been used as a residence. 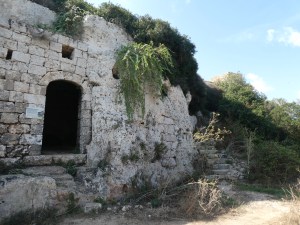 The inside of the bath’s main chamber was divided into the hot and cold chambers and there were little niches cut out of the stone, which were probably used for statutes during Roman times.

The baths were fairly well preserved, but not the best examples of baths I have seen,  Still pretty awesome to hike down the VERY narrow, steep staircase to take in a bit of history.

I ended up hanging out at the site for a bit drinking a bottle of water (really needed it) and eating a banana I had brought along.  While taking a breather, three people wandered down the stairs.  Only the second group of people I saw all day.  (I had previously passed two young guys walking back from the baths as I was just beginning my walk towards the site.)

Anyway, they did not spend any time at the site. Took a quick look and left.  Eventually I followed their lead up the stairs and went to hunt for the ruins I ended up liking the best: the old Roman chariot ruts in the rock.  I have seen these kinds of ruts all over the world, but the surreal backdrop of the old ruts against the brand new condominium construction was the most bizarre I had ever seen.  It was really quite sad and hopefully the Maltese government will ensure the ruins are protected.

So after walking along the Roman chariot path, I found my way back to the main path and walked back down towards the bus stop.  The walk back down gave me an opportunity to really appreciate the spectacular views towards St. Paul’s Bay.

And as luck would have it, just as I made it to the bus stop, Bus No. 49 pulled up.  Perfect timing as the next bus was not for another hour.  So with that I made it back to my hotel, pulled off my very hot and dusty hiking boots and took a cold shower.  It had been really fun hiking around the old site.  If you are ever in Malta, I highly recommend it.

After my shower, I ended up walking down the street for a glass of wine, a pizza and a couple more cocktails at a little outdoor restaurant in the middle of the main square.  It had been a great day!

One thought on “Ruins on High”