So today (Thursday) was not only the last day of September, but the last day with the fabulous Joan and my last full day in Malta.  (And my negative COVID test assured me that I can board the plane back to the U.S. – thanks Pfizer and Moderna.)

Anyway, after my 8:00 a.m. COVID test, Joan and Chris picked me up and we drove to the first site of the day, the Mosta Church aka the Mosta Rodunda with its incredible dome, which is believed to be the third largest in the world.

The Mosta Rotund is not only famous for its enormous dome, but in WW II, a bomb hit the dome during an air attack.  And while the bomb fell through the dome into the middle of the church at a time a service was taking place, the bomb failed to explode.  Locals hailed this as a miracle. 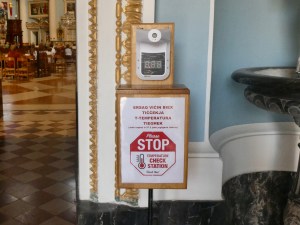 When we arrived at the church, we had our temperatures taken by this freestanding thermometer machine … ah the things that have been invented because of COVID.  After the all clear, Joan and I sat on some chairs in the middle of the church while Joan pointed out some of the features of the church as well as giving me a history of the bombing.

Next, we went to the back of the church which houses a little museum with pictures of the actual bombing and a replica of the bomb dropped on the dome.  Apparently some years ago, the German pilot of the plane that dropped he bomb came to the church and apologized for the bombing.  Quite the story.

Anyway, after the visit to the church, it was time for some retail therapy.  We drove to the Artisans Craft Village located near the fortress of Mdina in the center of the island(more about the Mdina shortly).  Now the craft center was originally developed to showcase local artists and craftspeople.  The original buildings were beehive like structures, but they have long since outgrown the outdated buildings and are in the process of constructing a brand new center featuring buildings where artisans can not only showcase their crafts, but people can watch them at work.

So Joan and I visited three shops: Valletta Glass, Frank Mansueto Jewellry and a shop where a fellow was making ceramics and candles and also selling local olive oils and spirits.  Unfortunately, due to COVID we were unable to watch the glass blowers work.

No matter, I was still able to buy some lovely items.  I ended up finding some gorgeous hand blown glass Christmas ornaments, a beautiful hand blown decorative glass piece, a filagree necklace and earrings, a ceramic figurine replica of the Sleeping Lady  and some olive oil, local lemoncello and honey liquor.

After the Artisan Village, we drove to Rabat (right near Mdina) and visited the studio of Stephane Borg, a well known local artist.  I ended up buying some coasters and a lovely little picture she had painted.

By now, it was approaching noon and we had an appointment to visit the Roman Domus in Rabat.  COVID was restricting the hours of operation for many of the attractions in Malta (despite the very high vaccination rate and very low transmission), and the site happened to be closed on Thursday.  However, Joan had once again made some phone calls and through the miracle of her connections was able to have the Malta tourism board open the site for me in what may be the ultimate “it pays to know someone”.

Now most who know me, know I have what I may call a borderline addiction to Roman ruins.  I could spend days wandering around these sites.  And part of this trip was supposed to take me to Cyprus where Roman ruins abound.  Unfortunately, though, I had cancelled my trip to Cyprus due to high Covid numbers and low vaccination rates so my Roman ruin fix was really going to be limited to the Roman domus and the few ruins I was able to see last week on my hike up the Roman road.

Anyway, I was thrilled when we were able to enter the site to see the remains of the domus, a Roman townhouse that is believed to have been constructed around the 1st century BC and occupied until the 2nd century AD.  The home was occupied by an aristocratic family in the beginning, but there is evidence (based on repairs) that others who lived there may not have been so well off.

And as is the case with many Roman sites, this site had been repurposed by the Arabs in the 11th century turning it into a Muslim cemetery so it is likely many of the ruins were lost during this period.  The site was eventually discovered in 1881 when excavations revealed a number of well preserved Roman  mosaics, statues and drinking vessels as well as remains of the Muslim cemetery.

In order to preserve the site, a building has been constructed around the ruins and a small museum occupies the entry area.  The museum was really well done with a section of the museum dedicated to the remains found in the Muslim cemetery, but the star of the show was the remains found in the Roman domus.  There were old marble statutes, clay figurines, terra cotta masks, glass drinking vessels and some beautiful well preserved mosaics, which were located in the remains of the peristyle or Roman courtyard (which every well off Roman had in their home).  The display even included the partial remains of some of the Roman columns which surrounded the courtyard.

We also saw a remarkable well preserved marble statute of the emperor Claudius as well as the headless remains of marble statutes of his family.  So many of these ancient Roman statutes end up headless, which is a shame.  It would be nice to see what these folks really looked like.

Anyway, we sadly saw all there was to see and moved on across the street to the Mdina (which is one of the Malta locations used to film season 1 of the Game of Thrones).  Now Mdina is the fortified city that was at one time occupied by virtually every conquering force including the Phoenicians, who fortified the city, the Romans and the Arabs.  The city was left to the Maltese aristocracy when the Knights of St. John took over the island and made Valletta and the Three Cities the center of Malta.

Now Mdina was unlike any of the areas I had previously visited.  Oh sure there were narrow alleys and stone work everywhere, but the buildings evoked a notion of grandeur as we wandered through the main gate.  The palazzos were exquisite with large windows featuring intricate carvings and magnificent doorways and facades.

We passed by the Palazzo de Vilhena, which now houses the Museum of Natural History.  However, its magnificent courtyard was still intact.  We saw the old law courts with its ornate exterior.  There was a convent in which four cloistered nuns remain who enjoy a beautiful inner courtyard.  We even saw the balcony used by Game of Thrones in season 1 for the whorehouse.  And at the end of the walled city there was an incredible view over the walls that takes in the Mediterranean and the valley.  In fact I could see all the way to Valletta.  The Mdina was absolutely beautiful.

We stayed in the Mdina for lunch before walking back through the lovely alleys and streets and through the “Greek gate” to head to our last stop of the day: St. Paul’s Grotto in Rabat.

Now in 60 AD, it is said that St. Paul was shipwrecked on Malta.  He stayed in Malta for an extended period of time recuperating and converting the locals to Christians.  While in Malta he is believed to have stayed in an underground grotto that is located beneath St. Paul’s Church, which was constructed in 1675.

To reach the Grotto, we had to climb down an old winding narrow stone staircase.  The chamber featuring the grotto is small and contains a large marble statute of St. Paul and a silver ship added in 1960 to commemorate the 1900 anniversary of his shipwreck on the island.

Outside the grotto there were some additional statutes of St. Paul, but the area that grabbed my attention was the partial remains of a fresco painted on the wall.  It dates to the 17th century and was really exquisite.

After taking in the grotto and having a quick peak inside the church we headed back to the car for the drive to Valletta.  My trip to Malta was coming to an end.  I planned to spend Friday morning at the Museum of Archeology (where many of the original statutes and figurines are kept) before boarding my flight to London and then Seattle.

My trip had been the break I really needed and it had been made all the more fantastic by the incredible guiding of Joan Sheridan.  Thanks Joan for making my trip so memorable (and apologies for not using my flash on the picture).

One thought on “Roman Around”