Now the mangrove forest reminded me slightly of the swamplands in Louisiana, only there were no alligators and the branches of the mangroves did not hang over the water quite as much.  In addition, the waters of Elizabeth Bay are not only filled with fish, but baby sharks, which hang out in the area until they are mature enough to fend off predators like the Orcas.

So once we cut the motors, we drifted past the mangrove trees and immediately spotted a heron at the very top of one of the trees looking for breakfast.  We then turned into a little inlet, where we spotted a number of hungry pelicans hanging out in the trees.  Periodically, one would take flight, dive bomb the waters and come up with something to eat.

At the end of the little inlet, we spotted a sea lion lounging on a mangrove tree branch.  Once he became aware of our presence, he sat up and began posing for us.  Seriously.  It was hilarious.  And when we finally left, he dropped back down on the branch and continue with his siesta.

We continued drifting around the mangrove forest occasionally spotting a sea turtle or an eagle ray in the water and looking at a variety of birds flit about.  However, we were striking out on penguins which love to nest in this area.  Harry told us that ferrel cats that have been living in the area have attacked the penguins and reduced their numbers so the Ecuadorian government built artificial penguin nests on a small little island nearby where ferrel cats are not found.  The result has been a significant increase in the Galapagos penguins, but at this point, the little devils were hiding from us.

We eventually called it a morning and began the ride back to the boat, but then

our patience was rewarded.  We spotted one lone penguin on a rock in the middle of the bay.  YAY!  We watched the little fella for a while before continuing on with our ride back to the boat, but as we were starting up the motor we heard the honking of other penguins.  We immediately drove in the direction of the sound and found a half dozen penguins in the water and on the rocks.  And bonus … a little further down the rocky outpost we spotted three flightless cormorants lazing on the rocks.

We watched the penguins for a bit and it was hysterical (as are most penguins).  Three of the penguins were fighting over space and one penguin sent another flying down the rocks.  Yikes!  The defeated penguin didn’t given up though.  He hopped back up on the rocks and proceeded to climb up with the other two.  At this point we began our trip back to the boat, but I would love to know how the whole situation turned out.

Once back on board, we had breakfast while the boat went south for two hours to Punta Moreno, also on the island of Isabela.  The plan was to put on our hiking boots and motor over to the point where we would hike the lava fields of Punta Moreno to two small crater lakes where Galapagos flamingoes are know to hang out.

As our zodiac approached the shoreline, we spotted pelicans nesting in the trees.  We did not see any babies, but still cool to see.

Anyway, once our zodiac reached the shoreline, we climbed up the very rough lava stone one by one to take in the enormous lava field.  As we began our trek along a stake marked path, it was fascinating to see pioneer cactus growing through the lava rocks as well as the occasional daisy like plants.  This is what fascinated Charles Darwin so much when he explored the Galapagos.  Life overcoming the odds.

The hike over the sharp lava rocks was challenging especially when we came across collapsed lava tunnels where we would have to make a short jump to the next stones.  Eventually, we reached the first lake, but there was no sign of the flamingos.  Fortunately a short time later we reached the second lake and … success!  We immediately spotted one flamingo floating in the waters, and at the other end of the lake we spotted a second flamingo standing in the shallow water.  And as we hiked along the area surrounding the lake we spotted a third.  Soon the third flamingo swam towards the flamingo standing at the other end and the two began honking back and forth until they were together at the far end of the lake.

We immediately sat on the lava rocks and took in the site.  It was perhaps one of the strangest geological sites I had ever seen.  In the distance, we could see the volcano that had caused the lava field hundreds of millions of years ago while all around the lake there were bits of greenery and cactus.  And then of course, you had the three flamingoes floating in the lake.  The contrast was remarkable. 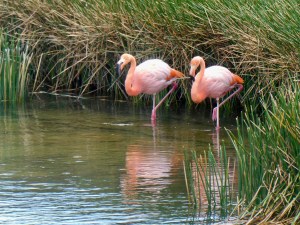 So after spending some time with the flamingoes, we followed the trail of stakes back to the shore and our ride to the boat.

We had some lunch and then about an hour later got into our wet suits for some snorkeling.  Today we were on the lookout for seahorses which were known to inhabit a small area near the shoreline off Punta Moreno.  We set out with the promise that if anyone spots one we need to call it out so everyone can have a look.  Unfortunately, it was not meant to be.  No one spotted a seahorse.

Nevertheless we had a great time spotting enormous sea turtles and colourful fish.  No shark sightings for me, but. I was dive bombed by a flightless cormorant who was looking for something to eat.  For some reason the little guy dove under the water and came right at me.  I moved back and he followed it up with another dive bomb at me.  It was hysterical.  In fact I was laughing so much I ended up with a mouthful of seawater.  YUCK.

I was also the target of a rather playful sea lion who kept swimming around and towards me.  I am not sure if he was looking for food or just wanted to play, but it was great fun.

We finally called it a day around 3:00 and headed back to the boat.  Once on board, the Captain started up the engines and set sail for Floreana, an island 12 hours away.  The first part of the ride was fascinating because the coastline had literally dozens of spatter cone vocanoes lining the coastline.  It was a fascinating initial part of the journey.  Unfortunately, the rest of the 12 hour trip was not as enjoyable as the seas were very, very rough making the 12 hour journey to Floreana a very rocky ride to say the least.