So first up on the agenda today was a zodiac ride through Barrington Bay where we did a wet landing and prepared for a hike around La Isla Santa Fe.  The island is home to a large colony of sea lions and as a result, the bay is filled with black tip sharks looking for an easy meal of baby sea lion.

And as luck would have it, we spotted two fins in the water circling in the middle of the bay as the zodiacs motored towards shore.  It was indeed two black tip sharks looking for breakfast.  We tried to follow them, but they disappeared almost as fast as we spotted them so we continued to shore where we donned our hiking boots and prepared to hike a fairly easy trail around the peninsula.

As we got ready, we became concerned about one tiny, very skinny little sea lion pup, who was letting out little barks and trying to find its momma.  It soon became clear that the sea lion had been abandoned.  The little fella was trying to nurse on just about every female sea lion on the beach, but no one was willing to provide any nourishment for the pup.  It was a terrible sad to see the sea lion scooting around the beach and braying with no one to come to its aid as you can see from the video below (and again thanks to Lexi for the vid).

We eventually moved on and started our hike up a small sandy slope, which led through a forest of prickly pear cactus.  And wherever we saw the prickly pear, we would see a yellow land iguana which populates the island.  Harry told us that the the land iguana feeds on the prickly pear when one of the pads drops, but unfortunately, we did not happen upon what Harry describes as a feeding frenzy when a pad drops and the iguanas race to feed on it.

As we wandered through the cactus forest, we came across a myriad of sea lions lounging on the rocks high above the sea swell below.  According to Harry, these were male sea lions who are run off by the dominant male.  The banished males then hang out in the rocks above the beach.  And while this was supposed to be males only, we did spot a couple of small pups along the trail.

It didn’t take us long to complete the circuit and we soon found ourselves back on the beach where we started.  Harry then asked us if we wanted to climb up to the lookout point at the top of the island.  It was about a half mile hike over very sharp lava rocks and then up a steep cliff.  Little Thomas told everyone to raise their hand if they wanted to go.  We all bought in so we immediately set off over what proved to be an incredibly challenging path.

I was wearing my hiking boots, but I still found it hard to balance on some of the lava rocks with jagged edges and uneven surfaces.  As we walked, we periodically passed a prickly pear cactus and the inevitable land iguana nearby.  Eventually we reached an improvised, very, very narrow rocky trail with a lot of loose gravel that took us straight up the cliff.  Despite the difficulties, we all reached the top, including Thomas, and took a well earned break.  The views were indeed spectacular.

But then the hard part began.  Getting down.  The loose gravel and sharp stones made the climb down far more treacherous than the climb up.   As I made my way down, I lost a bit of footing and stumbled into a sharp stone that pierced the top layer of my left shine leaving a nasty gash and a rapidly growing bruise.  (No I did not take a picture.). Good grief.  I can’t catch a break.  Fortunately, it looked worse than it was and aside from some blood and a healthy bruise, I eventually made it back to the beach.

Once on board, my hero from my cramping day, Lisset (who happens to be a dermatologist), cleaned out the wound and applied some steri strips and a bandage and I was good as new.  At this point, all I can do is laugh. 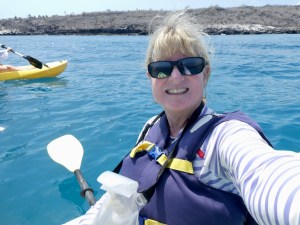 I got into a single kayak, Erica got on a paddle board and everyone else were in double kayaks.  Once outfitted, we soon set off in the bright mid morning sunshine for the beach area we had landed on earlier in the morning.  The water was incredible calm and crystal clear, which always makes spotting creatures below very easy.

As we paddled around Vicky and Luis overturned  their kayak not once, not twice, but three times.  I think by the third time they were laughing so hard that it was almost impossible to keep the kayak afloat.  And if that wasn’t enough, Paris and Lexie started paddling out to sea before righting the ship and then overturning the kayak twice.  Eventually with the help of Harry and Arnie they all made back into their kayaks, but Harry said that between Vicky and Luis and Paris and Lexie they set a new family record for flipping kayaks.  It was a riot to watch it all unfold.

Now as far as the marine life, it was really slim pickings.  Erica had a blacktip shark swim under the paddle board and I came across 4 baby sharks, which zipped away as soon as I pulled out my camera.  A while later I had two sea turtles swimming near me with one swimming right under my kayak, but other than that, we did not see much.  Nevertheless, the kayaking was a lot of fun in very easy, calm conditions.

Now perhaps the most impressive site during kayaking was Erica’s acrobatics.  She managed to do a headstand yoga pose on the kayak.  Talk about impressive!  And we have pictures to prove it.

Anyway, after about an hour of kayaking, we headed back to the boat for lunch.  The Captain began our two hours trip north to South Plaza where we were going on a hike around the small 13 acre island.

By 2:30 we were loaded in the zodiac and headed to the wharf for a dry landing.  Now unfortunately, the sea lions had taken over the wharf and Arnie had to try and chase off a juvenile sea lion so that we could pass.  Fortunately, this one did not feel like putting up a fight and slid easily into the water so we could pass.

Now South Plaza might just be the prettiest little island in the Galapagos.  It is covered in red ground over and the cactus were full of yellow flowers.  Clearly, the island had seen some recent rains.  As we walked the little trail around the island we passed a number of land iguanas perched under cactus.  We even saw a baby iguana hiding in the crevice of a rock.

As we climbed up to the top of the path we had magnificent views of the cliffs below.  Pelicans, frigates, tropical birds and swallow tail gulls flew overhead as the dominant male sea lions barked at anyone and everything.  It was an amazing scene. 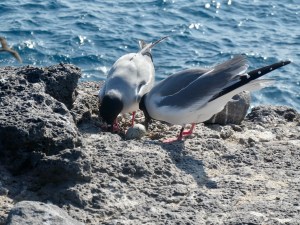 We eventually reached the end of the path where we found a number of swallow tail gulls nesting, building nests or, in one case, watching over an egg.  There were also numerous sea lions on the jagged cliffs at the top of the island.  Apparently, this was another example of banished male sea lions making their home away from the shore line.

After standing near the top of the path and admiring the view, we started our walk back to the dock.  Unfortunately, this time, the large male dominant sea lion had decided to take up residence on the middle of the dock, making it impossible to pass.  Another ship had arrived and the folks were stuck in the zodiac while their naturalist tried to force the sea lion into the water.  However, it was having none of it and even challenged the naturalist by hopping closer and barking.  Eventually, the sea lion laid down just far enough away from the center of the dock that folks could pass so once the other ship offloaded its passengers, we jumped from rock to rock around the sea lion and finally onto the dock and into the zodiac.  Clearly, the sea lion had established who was boss.

Once back on board the boat, Lisset insisted on changing my bandage on my leg after my shower and we were able to check out the damage again.  Fortunately, it was not as bad as it could have been with just a large bruise and a nasty little cut.  No infection and no serious damage.  I will live to see another day!

And while we were hiking all over South Plaza, some fishermen came to our boat and shared the catch of the day.  So were going to be enjoying a wonderful fresh fish dinner.  And I am certain the fabulous Chef Guapo on our boat will make the meal fabulous as always!

So while we lounged on the boat, the Captain moved our boat to a bay where numerous boats were anchored.  This would be our home for the night.  And wouldn’t you know it.  We had no sooner dropped anchor than Harry spotted a huge black tip shark circling our boat.  The big guy hung with us for almost an hour before it became too dark for us to see if it was still with us.  I did not get a video, but Lexie took a couple of great videos and was kind enough to share them with me so all credit to Lexie for this great video.