So today I was off to tour southeast Wales with the “Travelling Bard”, a fellow who created two small group tours around southern Wales. Unfortunately, he only runs the tours on Saturday and Sunday so I missed his tour to southwest Wales on Saturday, but managed to snag a seat in his 8 person van for a tour of southeast Wales.  And bonus, the sun was shining.

We headed out at 8:00 a.m. with 7 other folks from the U.S. (poor sod).  Anyway, our first stop was a small, picturesque town at the confluence of the River Monnow and the Wye River called Monmouth. It turned out to be a lovely little town that at one time had a massive cattle market in the main square. And while the market now continues in a more formal setting in the adjacent town of Raglan, the memories of cattle markets past live on in some iron sculptures commemorating the little town’s history.

The main site in the town is the beautiful Monnow River bridge, which is the only remaining fortified river bridge in Great Britain. The bridge crosses the River Monnow 500 metres from its intersection with the Wye River.

Now Monmouth’s history dates to Roman times although the current bridge “only” dates to 1272 when it was constructed to replace a 12th-century Norman timber bridge. The bridge was apparently the center of many fights throughout the medieval era, the English Civil War, and the Chartist uprising. It was absolutely beautiful and in really good condition. (Plus there was gorgeous herron hanging out near the bridge when we arrived.)

After taking in the bridge, I did a quick walk around the little town, but my walk to the old church just off the main street was halted by crime scene tape strung across the road. Apparently three guys attacked another guy in the middle of the night sending the fellow to the hospital and resulting in an ongoing investigation. No matter, I ended up doubling back and hanging out by the river until it was time to leave.

Next up was short trip south to the magnificent Tinturn Abbey. Great Britain is filled with the remnants of abbeys thanks to good old Henry VIII. Henry VIII, of course, started up his own church (the Church of England) when the Catholic Church refused Henry’s request to nullify his marriage.  As a result, many of the Catholic Abbeys were seized along with their land on orders for Henry VIII leading to their eventual state of disrepair. Tinturn Abbey is one such abbey.

The original abbey was founded in 1131 by Cistercian monks and was made of timber. In 1269 they began to build a new abbey church and didn’t stop until they’d created one of the great British Gothic churches. Unfortunately, it was only a mere 300 years later in 1536 when the abbey was surrendered to Henry VIII and the abbey began its descent into ruin. 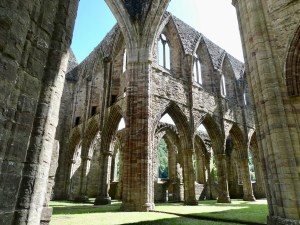 Nevertheless, the abbey still retains its amazing grandeur. Although the roof has long since disappeared, the magnificent windows and soaring arches inside the nave are still present and allow you to visualize what an amazing building the abbey once was.

I wandered around the entire exterior before doubling back and walking through a small archway into the interior.  It really was so spectacular that I think I will just let the pictures do the talking. (And bonus, we were among the few people there. But as we were leaving, two buses pulled up.  Score one for the Travelling Bard!)

After Tinturn Abbey, we travelled south to Cheptow where we were going to hang out for lunch and take in a visit to the magnficent Cheptow Castle, the oldest surviving post-Roman stone fortification in Britain.  The castle’s construction began in 1067 on a cliff above the River Wye with additions to the castle ongoing through the next three hundred years.
While the castle was used to defend the area from invaders, the castle is most famous for housing King Charles I who was imprisoned here until he was put to death in 1680.

I thought the castle was fabulous and wandered around with virtually no one on the grounds. It was lunch time and everyone in my group stopped for lunch first and it appeared that others did the same so I had the castle almost entirely to myself.

I wandered through great rooms and climbed up the tiny staircases to the top of the towers. I got up close and personal with the statutes on top of one of the towers where the views were magnificent and where Charles I was allegedly held before his death. I found the old wooden door that was supposedly 800 years, and I walked through the great tower built by Williams I, which was the oldest structure on the grounds. The entire castle, while not huge, was in great shape and incredible to visit.

Now the only downside was that the castle was built into a hill so as I moved from one building to the next, it was all uphill in the direction of the town square. And while this normally wouldn’t bother, I was not particularly happy to learn that once I reached the end of the buildings to visit, I had to double back down the hill to exit the castle only to have to turn around and walk the path outside the castle all the way back up the hill to the little town square where I was going for lunch. Gesh.

Anyway, after my deceptively tough second hike up to the little square, I wandered around what turned out to be a Sunday market.  I found a lady selling the most magnificent fudge (3 bars for 15 pounds) and then found a guy selling Malaysian flatbreads.  The flatbreads were stuffed with chicken and served with pickled, spicy vegetables.  I purchased one flatbread, took a seat on the stairs of the town square, and … damn if this food wasn’t the best I have had since the start of my trip. Simple, tasty (a bit spicy) and full of flavor. Thanks fella for the fabulous lunch. 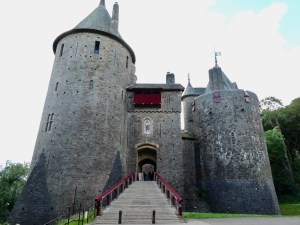 After the lunch break, I wandered back down the hill to meet the van and the others for our last two stops of the day. First up was a little detour to Castell Coch, aka the Red Castle, a 19th century Gothic castle built above the village of Tongwynlais. Numerous castles have occupied this site dating back to the Normans in 1081. However, this version looks like something out of Disneyland and was only rebuilt in 1875-1879 as a luxury summer house for the 3rd Marquess of Bute.

We did not pay to visit inside site and only stayed for about 15 minutes, which in my mind was plenty of time to wander around the perimeter, take in the architecture and call it good. Not really my cup of tea, but there were plenty of kids who seemed to be loving it!

Our last stop of the day was the Caerphilly Castle, a real castle with a history dating to the the 13th century. The trip to the castle took us on a VERY narrow road through a lovely little forest and past a few little pubs and inns. It was a nice diversion from the freeways we had been on for most of the trip.

Anyway, once we arrived in Caerphilly we all just gaped at the castle. To say it was huge was an understatement. The castle apparently occupies around 30 acres and is the largest castle in Wales and the second-largest castle in the United Kingdom after Windsor Castle.

Construction on the castle began in 1268 and continued (as with all castles) on and off for several decades. The castle is famous for its surrounding man made lakes which provided additional fortification as well as the concentric rings of walls which also added protection.

Now I have to admit, this castle left me rather underwhelmed. Part of the front towers of the castle are under reconstruction so that might have taken away form the ambiance, but I really think it was that I just didn’t find the layout particularly overwhelming. Perhaps my favourite part of the castle was the “leaning tower”, a corner tower that began to lean in the 17th century and continues to lean today. However, the best part was that a statute of a person was added to make it appear the person was holding up the tower. Classic.

I ended up wandering around for about an hour before I walked across to a coffee shop, ordered a cup of tea and some shortbread cookies (a specialty of the area, but I have to say my shortbreads using my Nana’s recipe are better) and called it a day. Tomorrow, it is time to tour Cardiff.