So today was my first full day in Edinburgh. I arrived yesterday late in the afternoon and simply hung out in my relatively new (1923) Inn on the Mile hotel, which is smack dab on the Royal Mile (the street that runs from Edinburgh Castle to Holyrood House, the home of Her Majesty when she is in residence). Speaking of which, the Queen is actually in Edinburgh for the week, which explains why I could not get a ticket to visit Holyrood House. I have not yet seen her, but there were a lot of people walking around with fancy hats and coat and tails yesterday for the Queen’s Garden Party. (My ticket was obviously lost in the mail.)

Anyway, today was action packed with a three hour walking tour of Edinburgh, followed by a visit to the Royal Yacht Britannia (which was decommissioned in 1997 when then Prime Minister Tony Blair decided that the yacht would not be replaced). It is now parked on the waters of Edinburgh so that was on the list. The final item on my list was to take the Hop on Hop Off Bus Tour since the walking tour was limited to the main sites in the old town of Edinburgh and I wanted to cover some other sites not on the walking tour. 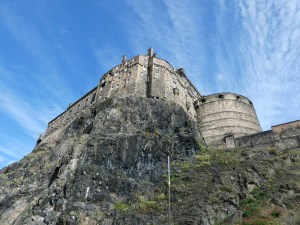 After a very light breakfast, I headed up the Royal Mile towards the meeting point at Usher Hall, which I was assured was a quick 6 minute walk, but turned out to be incredibly off base and more like 25 minutes), but on the plus side, I got to see Edinburgh Castle from below and it was massive.

Anyway, as I walked up the hill (everything is up hill here), I ran into a massive police presence and all sorts of blockades. Turns out that Prince Charles and Princess Anne were making an appearance at the St. Giles Cathedral for the Order of the Thistle, which is apparently some honor bestowed on Scots who have dedicated their life to public service.

Fortunately, I found a way around the crowds and the blockades and soon found myself on the steps of Usher Hall waiting for our guide, Steven Usher (yes of the Hall name – his family is rather wealthy). Once the group of 8 were assembled, we started the walking tour. Now Mr. Usher had a VERY peculiar way about him. When he addressed us, he wanted us all lined up in front of him. At first this was kind of quirky, then it became rather annoying, which was only the beginning of many annoying things about this tour. 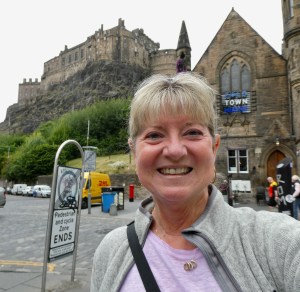 Anyway, we made our way through the back alleys and to a vantage point to take in the mammoth Edinburgh Castle high up on a volcanic plug, overlooking all of of Edinburgh. For the next 15 minutes or so, Mr. Usher regailed us with stories about the history of the castle (the first King of Britain was born there), the castle was destroyed by King Robert to deter the English from invading (didn’t work) was rebuilt in the 13th century and is a hodge podge of buildings constructed over centuries. The oldest building is St. Margaret’s Chapel constructed in the 12th century.

As we were standing there, Mr. Usher interrupted his castle stories to point out a building that was used as the inspiration for the Harry Potter School of Wizardry and Witchcraft (and it really did look like it).

We then began a trek down stairs to visit the Grassmarket, a multi block street that was the site of the old Edinburgh market (which still pops up on Saturdays), as well as numerous old pubs, including the White Hart Inn established in 1516.

And of course no area of Edinburgh can be complete without a good hanging story. We saw the spot commemorating the hanging site where literally thousands were sent to their death. And bless the Scotts. No one met their maker without a last shot whiskey. Yes, that’s right, there was a handling pub, The Last Drop, where the condemned had their last shot of whiskey. (The pub even have hanging nooses for lights… Yikes.)

We then turned the corner and went up … what else …. Diagon Alley … featured in the films where Harry & Co. go to purchase their wizardry tools. I thought this was petty cool as there was no way I would have found this on my own.

Now right after this is where Mr. Usher lost me. He insisted on spending a great deal of time talking to us about the various writers, poets, artists and philosophers in Scottish history. Now I have no problem having a discussion about these folks as we walked to see the sites, but Mr. Usher would stop us, line us up and then proceed to give us a lecture on the likes of David Hume, Robert Burns, Sir Walter Scott and on an on. I got VERY restless as I was not seeing sites so much as being given a history lesson. Not what I signed up for.

Fortunately, his ramblings were interrupted by the sound of bagpipes. Turns out there was a little parade to celebrate the Order of the Thistle so we all walked out of the little alley and took in the Scottish bagpipers and the fellows marching along in uniform. I did not see Chuck or Anne, but it was a nice diversion!

Anyway, once Mr. Usher took a look at the clock and realized he had spent the better part of half an hour on his lecture, we got moving again. We walked down some stairs and took a quick look in the Writers Museum (not really worth it) then doubled back and took in the workshop (now coffee shop) of Deacon Brodie, the upstanding man by day and robber by night who is said to be the inspiration for Dr. Jeckyll and Mr. Hyde.

Then it was on past St. Giles Cathedral aka the High Kirk of Edinburgh, with its off center spire and uneven windows before turning down an alley, climbing down some stairs and crossing into New Town. (Edinburgh is divided into Old Town and New Town with construction on New Town “only” being commenced in the 1760s. Here, we saw narrow alleys and a host of little bars before crossing over to Princes Street Garden and our last site, the Sir Walter Scott monument.

From here, I hustled away and jumped in a cab directing the driver to take me to the Royal Yacht Britannia. My ticket for admission was at 3:00, but it was not busy so they let me in early. In the lead up to boarding the yacht, they have set up a wonderful display of Royal family photos along with pictures of heads of state who have been on board, as well as pictures of the young men who keep the vessel running.

Now I am not sure what I expected from the tour, but I was very surprised at how understated the yacht actually was. Once on board, I was able to visit the bridge, the “garage” where the Queen’s car was stored”, the sun room, the front deck, the Queen’s bedroom, Phillip’s bedroom, the honeymoon room (called this because it is the only room with a double bed on the yacht), the crews quarters, including the rather nice bedroom for the Admiral of the ship and and officer’s dining room that was equally lovely. But again, I was struck by how low key the vessel was. Lots of teak and brass, high end silverware and china, but you never would have guessed this was the accommodations for a queen.

My favourite room was the drawing room where the Queen and her family would retire after dinner. It was tastefully decorated and simply lovely.

So after the Royal Yacht tour, it was back to New Town where I literally hopped on the Hop on Hop Off bus as it was about to pull out of the bay. I was a little nervous at this point because the ominous clouds were not boding well for sitting outside, but I would just have to play it by ear.

So the bus took me past some of the sites I saw in the morning including Edinburgh Castle, Grassmarket and the first half of Royal Mile, but it was what I hadn’t seen in the morning and a couple of the stories that made the trip worth while.

One story I found particularly fascinating was the story of the Resurrection Men, grave robbers who would rip open freshly buried caskets and sell the bodies to hospitals for dissection purposes. Apparently there were not enough people donating their bodies to science so the Resurrection Men started grave robbing because the sale of bodies was so lucrative. Graveyards erected towers to keep watch over the graveyards, but because the pay was so poor, the tower watchmen were bought off and the grave robbing continued. Yikes!

Anyway, once we moved off the Grassmarket area it started to spit a bit, but nothing serious so I stayed outside. As we moved on, we started to pass sites I had not seen in the morning including Candlemakers Row, various Edinburgh College buildings, the Edinburgh medical school and then down the second half of the Royal Mile towards Holyrood House. And of course, there was a huge police presence and lots of looki lous trying to get a glimpse of the Queen.

Once we passed Holyrood House, we the drove by the Scottish Parliament Buildings and all I have to say is … What the hell were they thinking??? In this glorious, ancient city with architecture rivaled by few, some lame brain decided it would be a good idea to construct a modern steel and glass building. YUCK. It is simply horrendous. Nuff said.

From the gross parliament buildings we moved on past Arthur’s Seat, an ancient volcano with its main peak looming over Edinburgh. Magnificent.

We then doubled back past Holyrood House and got a brief look at the Scottish Guard marching through the gates, before we moved up the hill for a fabulous view of the city of Edinburgh before passing through the New Town area and back to where we started. Perfect.

I jumped off the bus and walked up the hill (what else) to my lovely Inn on the Mile and called it a day. I was done in.