So after our night at the castle hotel, we were going to have a short day before arriving at our second castle, Ashford Castle, (which was actually a real castle and not a converted manor house). Anyway, before we reached Ashford Castle, we had a few stops planned. First up was a drive by Lord Mountbatten’s summer home and the bay where he was assassinated by the first remote control detonated bomb set off by the Irish Republican Army (“IRA”).

The drive through the area was fascinating not only because of the history, but because the landscape where the castle was located was so different.  The castle stood in what appeared to be the middle of nowhere without a tree in sight near massive bluffs facing the North Atlantic. This was in sharp contrast to what we were used to and what we had just passed: rolling hills, small groves of trees and lots and lots of sheep.

We drove past the gates to Classibawn Castle and then followed the narrow, meandering road along the bluffs on the North Atlantic Ocean. Liam stopped the car and we all got out and took a short (windy) walk along the bluffs. The view was magnificent and as you walked further towards the edge of the cliffs, the massive castle came into better view. It was an amazing setting in what I can only describe as stark, desolate beauty.

Liam then drove us through the little village and past the boat dock where the Shadow V had been moored shortly before it was taken out to sea for its final journey. Liam also pointed out the general area where the boat blew up not far from where the boat had been moored. It was probably less then 15 minutes after the boat left the moorage before the bomb was detonated. The IRA was clearly watching the vessel and detonated it at a point when the vessel was still within range yet close enough for everyone around to hear the blast. A very dark day in British/Northern Ireland relations.

After the trip to Classibawn Castle, we drove to the village of Drumcliffe to visit the Drumcliffe church and burial ground of William Butler Yeats. Now I was not expecting much from this visit, but it turned out to be one of the highlights of the day. Liam kept insisting that if the Rector was that we HAD to take a view minutes to visit with him. I am not a religious person and saw no need to engage in any kind of sermon from a holy man. However, I could not have been more wrong.

When we arrived, “Rector Malcom”, greeted us and showed us around his little church. He told us there were about 100 families who attended the church. Anyway, he sat us down in the front pew (we were the only ones in the church) and proceeded to tell us a story about the history of the little church involving a local man named Columb (the man who has a church named after him in Derry, which we saw when we walked the Derry wall) and a religious book he recovered during the Dark Ages that predates the Book of Kells. It would take ten pages to tell the story, but Rector Malcom was an incredibly gifted, funny story teller weaving in the history of the Druids, Columb and the church all in one 15 minute tale. It was really remarkable.

After the lovely visit, we went to see two more Celtic High Crosses in the graveyard. The first included the carving of a camel, which Rector Malcom believed came about because of the influence of Coptic Christians from Egypt visiting the area. The other high cross was what could best be described as remnants, but Rector Malcom told us that legend has it you will be bestowed with good luck if you touch the cross … so when it Rome ….  We of course touched the cross.

We eventually did see the grave of the poet William Butler Yeats, but it was kind of an after thought at this point. The grave contained a simple headstone with the short epitaph “cast a cold eye on life, on death, horseman, pass by.” This was apparently written by Yeats for his own grave.

Yeats died and was originally buried in France, but his remains were exhumed and moved to Drumcliffe cemetery because it was always his desire to be buried at the church where is grandfather had been a rector. There is some question whether the bones buried in the grave are actually those of Yeats. Nevertheless, the grave is marked as Yeats’ burial ground and his wife is also buried in the same grave.

After the somewhat surprising visit to Drumcliffe Church, we drove about an hour before our next stop at Carromore Megalithic Cemetery. Carromore contains a large group of megalithic tombs that were built in the 4th millennium BC, during the Neolithic era. There are thirty surviving tombs, the earliest dating to around 3700 BC.

The drive to Carromore took us through a myriad of little villages on a small two lane “highway”. The landscape on either side of the road was much more rocky than we had seen so far with more cattle than sheep and very few farms that included any crops. In addition, as we drove we saw a lot more hills. And I wouldn’t go so far as to call them mountains, but there was a lot more elevation around us than we had travelled through to date.

We reached Carromore and were provided a nice little overview by one of the guides in the visitors’ center. We learned that the tombs generally contained the cremated remains of men, women and children along with remains of deer antlers, quartz and shells. Based on DNA evidence, is believed that the people buried in Carromore came from France, which is amazing in and of itself given we are talking 3700 BC. How the heck did they make it all the way from France?

The other amazing thing we learned is that, like New Grange, the position of the center monument, known as Listoghil, reflects the sun on October 31 and the last day of February and creates a glow on the stones like fire. The stones are apparently perfectly aligned with the position of the sun over the far hills on those days. Coincidence or intent? The guide said it is believed that it was intentional and done to celebrate the coming winter and the coming spring. We were all flummoxed as to how the heck people without the use of calculators or computers could figure out how to align the stones with mountains that were at least 10 miles away. Unbelievable.

Anyway, after the overview, we proceeded to wander around the old rocky tombs and as we wandered, Liam reminded us to look in the distance to see Maeve’s Tomb. Maeve’s Tomb sits atop a hill in the distance and looks very similar to the tomb we saw to New Grange. Legend has it that Maeve’s Tomb is the final resting place of the mythical Goddess/Queen Maeve, who was known for her love of war. It is said that she is buried upright in full battle gear with all her weaponry facing her enemies in Ulster to the north. The tomb has never been excavated, in part because the locals want to keep the legend alive.

So after we spent about a half hour wandering around these amazing rocky tombs, we began the one plus hour drive to our stop for the night: Ashford Castle. We had insisted to Liam that we arrive by 3:00 so we could take full advantage of our night in the castle.

And bless Liam. He delivered. We arrived at the castle about 3:15. Now Ashford Castle has won awards for the best hotel in the world. And upon our arrival, I could see why. Our names were given to the guard at the gate and by the time we drove up the long drive to the front entrance, we were being greeted by all of the staff using our names. Amazing. 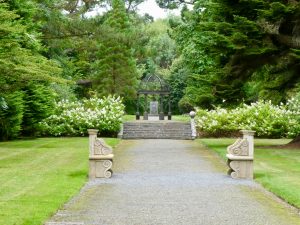 Now the origins of Ashford Castle date to 1228 and over the centuries, the castle has been added to by various owners. The one of the last owners was the Guinness family (yes the beer family) who purchased the castle in 1852. The castle and all 330 acres of land became a hotel in the mid 1930s and in 2015 was completely refurbished with 86 luxury rooms making it one of the leading hotels in the world. Over the years, the hotel has hosted Prince Rainier and Princess Grace, John Lennon, John Wayne, Senator Ted Kennedy, Brad Pitt to name a few, and most recently was the site of the wedding of golfer Rory McElroy.

After we were given a tour of the hotel, Cheryl, Donnie and I walked around the grounds. And it was incredible. The castle faces a lake, has horses, falconry, archery, a golf course, massive walking paths and a real moat. It is the most amazing hotel I think I will ever have the good fortune to stay in. And after spending time in the bar and enjoying a fabulous meal in the Cottage Restaurant, I can safely say the food and beverages are also first rate! We will enjoy our glorious night here at Ashford Castle, and then we will be back to reality tomorrow.

2 thoughts on “Hey Look … We’re Staying in a Castle”