We left Korça bright and early for our trip south across the mountains and west towards the coast. Our destination was the town of Gjirokastra. Now like the distance from Tirana to Korça, the distance from Korça to Gjirokastra is not that far at only 196 km (approximately 122 miles). However, Gasie advised me the trip was going to take almost all day. HUH? That’s either some really slow driving or some really lousy roads. Unfortunately, it turned out to be the later. Ugh!

By 9:00 a.m. we were off on the trip south and west. The trip started off fine on the type of country road that was by now quite familiar to me, and which I had been joking about as pretty rough driving conditions. However, it wasn’t long before I was dreaming of those country roads. We soon found ourselves on a very narrow road. In fact, the road was so narrow that if a car was coming in the opposite direction one car had to pull over to let the other pass.

And what made the road even more brutal was that it was as twisty and bumpy as they come. Now I had been dealing with a rather sour stomach for a couple days after eating something that had not agreed with me in Pristina (either plumbs, raspberry juice or yoghurt), and the road really was working against me. About 30 minutes into the drive I told Gasie to pull over and I ended up losing my breakfast right there on the side of the road. It was humiliating, but poor old Gasie could not have been nicer.

I had to admit once we resumed the trip, I was feeling a bit better, but by now I knew I was extremely dehydrated. My mouth and throat were really dry and as much as I was trying to drink, I had simply lost too much fluids over the past couple days. I was going to have to figure out how to remedy this.

Anyway, we continued the drive on through the farming country passing herds of sheep and apple orchards before finally heading up into the Pindus Mountains. And the views were really quite spectacular.

We ended up taking a short break about an hour and half into the trip so that Gasie could stretch his legs and I could have some mountain tea. According to Gasie, the tea is supposed to help with stomach issues.

Anyway, the quaint little stop was actually purported to be the oldest farm in Albania, which in addition to being a working farm, doubles as a rest stop for tourists. I sat and drank the tea while Gasie chatted with a friend of his who had also stopped with a French tour group. As I drank the tea, I began to feel worse, not better. Uh oh.

By the time we left, I was feeling downright awful. We no sooner passed through the gates and turned back onto the road than I was telling Gasie to pull over. Unfortunately, it was episode #2 for the day. By now, I was so parched and thirsty, but it seemed even fluids were not staying down. This was not good.

And unfortunately, Gasie told me we still had 2 ½ hours to go. Good God! Anyway, we proceeded onwards. At this point, we had already gone up and down a number of mountain passes, through forests of towering pine trees and past the occasional little town.

We soon passed a small lake and then we were climbing up, up, up higher into the Pindus Mountians. For a while, the bumpy road evened out and was actually rather smooth. The better road allowed me to really enjoy the spectacular views.

Eventually we drove right beside the Greek border with only a river dividing the two countries. At one point we passed a group of bicycle riders who were travelling with Cycle Albania. I had to admire them. I was having a tough enough time riding in a car through the mountains, yet here they were cycling up and down the narrow little road and doing apparently quite well. 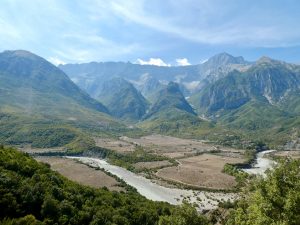 Just after passing along the Greek border, when we reached the summit of the pass. We ended up stopping at a lookout point and were really able to get a good look at the spectacular view, which really had it all. A river, beautiful mountains, trees and even a little village in the distance.

After the stop, we began the long descent and that is when episode #3 hit. Gasie pulled over once again while I rolled out of the car heaving (sorry to be so graphic, but as you all know, I never censor my blog). I really felt awful. I drank a bunch of water and that still didn’t help. The only thing that was really going to get me back on my feet was IV fluids. I mentioned this to Gasie and he told me we would go by the hospital in Gjirokastra and find out if that would be doable.

We eventually reached the little village I saw from high atop the hill, passed yet another castle and lots of vineyards (this was wine country). And then finally, finally, finally we reached the lovely two lane “freeway” that would take us the last 25 km to Gjirokastra.

We drove through lowland farming communities with still more vineyards and finally reached Gjirokastra just after 2:00 p.m. Gasie made a beeline for the hospital and we walked in through the door that appeared to be marked “Emergency” in Albanian. We took a left, walked down the hall and into a large room with a single desk in the middle and a women sitting behind the desk. Gasie explained what was going on and then the women, who turned out to be the doctor, asked me some additional questions.

Next thing I know, I am being ushered into a little room with four beds, shown a bed near the window and told to lie down. A technician (at least I think he was a technician) proceeded to insert an IV into my arm (he did a spectacular job with zero pain), and hooked me up to a bag full of fluids. The doctor explained to me that she was ordering two bags of fluids in order to rehydrate me. She explained, as I suspected, that I was so dehydrated it would be impossible to fix the problem with only bottles of water and rehydration salts.

So I proceeded to lay there on a bed in a hospital in Gjirokastra, Albania for the next two hours while the fluids drip, drip, dripped into me. Once I had received the fluids and the IV was removed, the doctor gave me a prescription for some follow up medicine to help kill the little bugger that was clearly dancing around my digestive tract. And get this … when I asked how much I needed to pay, the price was ZERO! That’s right, I did not have to pay a single penny. Free health care for all in Albania, including tourists! I told Gasie that if all of this had been done in the U.S., you could expect a bill of several thousand dollars. My God!

And the good news. I felt markedly better. Not 100%, but certainly I did not feel dehydrated anymore and the sick feeling had gone away. Hallelujah!

We then drove up the hill through the old Ottoman town to my hotel where I would be staying for the next two days. Tomorrow, we would do some exploring of the area. But for now, I would use what little was left of the day to rest in my old restored 13th century hotel.