So today was my last day in Albania before the long flight home. We left Berat around 9:00 a.m. heading for Tirana. We planned one stop along the way to the Divjakë-Karavasta National Park, which is located on the southeastern coast of the Adriatic Sea so our drive would take us west to the coast and north.

Now the park is one of the critical eco-systems in Europe. The park includes four lagoons (the Karavasta, Godulla, Godulla e Pishës, and Spiaxho) as well as 5,000 hectares of sand dunes, a pine forest and river delta. The park is home to more than 228 species of resident and migratory birds, with 15 species considered endangered, including the rare dalmatian pelican. In addition, the wetlands and coastal shorelines provide temporary homes for migrating birds between Europe and Africa. As well, the park is home to 25 species of mammals, 29 species of reptiles and 29 species of amphibia. 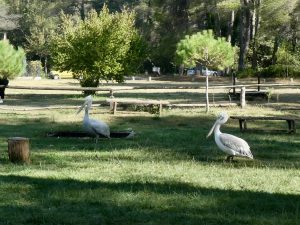 Anyway, the drive to the coast took us through a few little villages and eventually to the start of the pine forest. As we drove, we passed elevated walkways cutting paths through the trees before we reached the little information center and view point.

Now, unfortunately, I was arriving at a time of year when most of the migratory birds were not in the area. This included the dalmatian pelican. However, fortunately for me, there were two rather lazy dalmatian pelicans who had made the area around the information center home and refused to leave or migrate. So while the birds’ friends and neighbors had flown north, these two provided me with a good opportunity to see these rare birds.

I spent a bit of time watching the goofy pelicans and then walked around the highly informative information center before Gasie and I hiked up the multi-level viewing platform. Once at the top of the newly built little platform, the views were simply spectacular. To the west, I could see all the way over the sand dunes to the Adriatic Sea and to the south and east, I could see the Karavasta lagoon and the little islands where the migratory birds made their nests.

After spending some time at the top of the platform, I made my way back down the staircase and sat and watched more of the goofy pelicans. Eventually, Gasie and I got back in the car for the drive to the Karavasta lagoon. And in order to reach the lagoon, we had to make our way through the pine forest and then “off road” along the sand dune pathways. 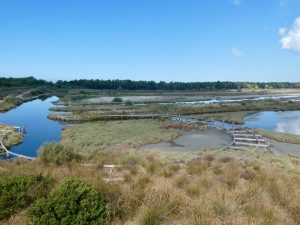 Once we reached the lagoon, we encountered a lone fisherman, but no one else. In addition, there were only a few birds here and there. However, the views from the second platform over the lagoon were absolutely beautiful. In the distance, I could see some herons and in another direction a lone heron trying to find some food. Here and there were clusters of birds, but for the most part it was just a peaceful, serene little slice of heaven.

I stood up on the platform for about twenty minutes taking it all in before I finally climbed down and got back in the car. We drove back over the sand dunes and back through the pine forest (and past none one, not two, but three old, abandoned bunkers) before heading back to the main road to Tirana. My vacation had come to an end.

All in all, Albania had been a wonderful country to visit. And in the end, Gasie had turned out to be a very good guide. I can’t say enough about this part of the world, While Macedonia, Kosovo and Albania may be the lesser visited countries of the Balkans, I think the wonderful food, amazing sites and truly lovely people make these countries can’t miss destinations!