Actually, I probably could have gone on sleeping for several hours.  I was in bed by 8:45 p.m., but could not get to sleep.  And then just as I was dozing off around midnight the damn howler monkeys started up right behind my room.  They went on and on.  Finally about 20 minutes in they stopped, but two hours later they were back at it.  Talk about loud.  (It was hilarious though, and I really would have enjoyed it if I hadn’t been slated to get up so early.)

Anyway, after apologizing profusely to Genny we headed back to the park for the sunrise at Temple IV to be followed by a tour of the sites in the daylight.  We stopped at the guard stand so the guys could check my tickets (sunrise and day pass) and give me my wrist bands before we continued on in the darkness with our headlamps giving us light.  We reached the map we had stopped at yesterday and turned to the left this time walking a few hundred feet before taking a left up yet another rocky dirt path.  This one, though, had a staircase which made it much easier to climb.

We reached the backside of Temple I catching a glimpse of the structure in the moonlight and then continued up a hill going on around the Great Plaza without entering the area.  We continued on a dirt path walking mostly in silence, but listening to the ever present crickets chirping.

At one point we could hear what sounded like rain falling, but it turned out to be monkeys peeing from the top of a tree.  Good thing we weren’t under the tree!  We passed a lonely bull frog sitting at the base of a tree at which point Ginny informed me we had just passed two small tarantulas.  Ugh. Please don’t tell me that!

After about 35 minutes we finally reached the base of Temple IV and then the fun started.  Temple IV is the highest temple at Tikal measuring 230 feet high (with a large portion still buried under mounds of earth and trees). Fortunately, wooden stairs have been constructed making the climb far easier than if my only option was the stone steps.  Also on the plus side, the pitch of the steps was a not nearly as steep as the steps I had tackled to watch the sunset the night before so that was good too.

Anyway, I set off in the dark up the endless flights of stairs finally reaching the top a few minutes later completely out of breath.  A guide at the top of the staircase told me that no talking was permitted (OK, but can I at least huff and puff for a couple minutes??) and then directed me around the end of the top of the temple to where a number of folks were already sitting on the staircase.  Over the next 20 minutes a few more folks joined and my guess was that there was around 40 people waiting patiently for the sun to pop up around 5:45.

As we sat the sky turned a pale grey, but just as the sky began to lighten, fog rolled in over the rainforest obscuring the temples in the distance and the horizon.  I suddenly realized, Tikal had its own ecosystem and as the night air began to warm the damp grasses and leaves were causing a fog to form, which floated over the forest.

And if that wasn’t cool enough, the howler monkeys began to screech from every direction.  It was eerie and fabulous all as the same time.  Then the birds began to wake up and we could hear parrots and woodpeckers.  At one point, a couple toucans flew by.  And all the while, the fog continued to drift around and below us.  It was simply magical.  One of the top nature experiences ever!

As the sky became lighter, the fog began to lift and we could see the forest below with the temples also coming into view.  It was soon clear enough for the sun to peak through as it climbed above the horizon.  The resulting view of the sun rising over the Tikal ruins and the rain forest was something I will never forget.   Entirely worth getting up at such a god forsaken hour.

Anyway, once the sun had risen, I found Genny waiting for me by the stairs and we hiked back down to the ground.  Now besides the outstanding sunrise, the other advantage to being in the park so early is that we beat the crowds.  At this point, there was only a handful of people in the part at 6:30 a.m. so we were going to have the ruins mostly to ourself.

We wandered around to the other side of Temple IV and walked to the Bat Palace also known as the Palace of Windows because of the unusual number of window openings.  The Bat Palace also had lovely carvings on the exterior of the building making it a bit unusual at Tikal.

We then took a turn down a path through some deep jungle at one point turning to see Temple IV in the fog.  And as we walked we were serenaded by birds, birds and more birds, including a very loud toucan that perched itself on branch above my head. 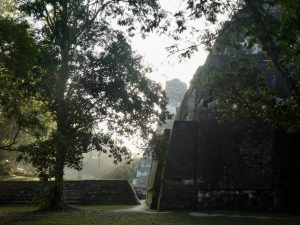 The path we were on was taking us past Temple III and back to the Great Plaza.  This time, we approached the Great Plaza from behind Temple II and the approach afforded a great view of Temple I through the mist.

And while the masks were cool, the views from Temple II were spectacular.  I could see all of the Great Plaza without a single person to spoil the view.  I stood on the viewing area for a number of minutes watching the sun climb over Temple I and then spent another few minutes watching  parrots flitting in out and around a tree before climbing down and heading into the Great Plaza.

I took a few pictures of Temple I before Genny and I headed over to the North Acropolis on (of course) the north side of the Great Plaza.  The North Acropolis was the burial ground for the royal families of Tikal for over 1300 years.  At the front of the ruins were the remains of carved stelae depicting a royal king.  It was really incredible.  We then climbed the stairs to take a look at the pyramid within a pyramid.  Like the ruins in Belize, the Mayan rulers in Tikal would build over existing palaces to leave their own mark on the city and they had done just that to the pyramid at the North Acropolis.

The interesting part about the original pyramid is that it was covered in masks.  At this point, there is only one mask visible and it is heavily protected so it took going down on my hands and knees to put my camera between the railings to get a really good picture of the mask.

After looking at the limestone mask for a couple minutes (by the way all of the buildings and structures in Tikal are made of limestone), we moved on across the Great Plaza to the south side and Maler’s Palace, where the elite lived. 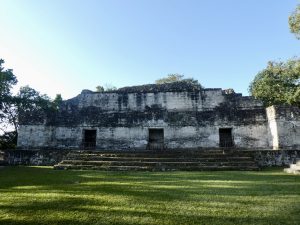 The palace was huge and filled with numerous residential buildings with cement beds that were at one time covered by the cottony flowers of the ceiba tree.  There were even doorways with holes on either side of each of the doorways for, what is guessed to be, poles to hang curtains.

We then walked around to the front of the palace facing the Great Plaza to take a look at the Ball Court, where the elite of Tikal played that wacky ballgame using a 9 pound rubber ball with the aim of moving the ball into an elevated hoop without using your hands.  Crazy.

So with the main structures behind us, Genny and I decided to make our way to an area called complex Q where there was an elevated structure that was believed to be used for astronomy.  The walk took us past another stelae and an alter depicting a prisoner bound and ready to be sacrificed.  The top of the alter depicts the prisoner laying across the stone.  Kinda gruesome if you ask me.

Anyway, we continued our walk in the direction of complex Q and as we walked the unmistakable sound of howler monkeys began.  And as we got closer to complex Q, the howling became louder and louder.  Eventually, we saw a rustle in the trees and spotted two howler monkeys moving around.   At the same time, we started hearing another group of howler monkeys beginning to let loose.  It was deafening.

And just when I thought it couldn’t get any louder, spider monkeys came out of nowhere with their high pitched screetch.  And of course, the monkeys were so high up and moving so quickly, it was impossible to get any kind of picture.

So against the backdrop of the monkey noise, Genny and I climbed to the top of what was believed to be an observatory to have a look.  There were nine stelae upright in front of the platform along with alters in front of each stelae.  Today, Mayans still come to this site for ceremonial rituals.

By now, it was close to 9:00 a.m. and we had been at the site since 5:00 a.m.  Genny advised we had pretty much seen it all so I climbed down from the observatory and we walked towards the path that would lead to the road and the hotel.  But wait … just as we were about to head down the path, spider monkeys came into view and this time, the little fellows cooperated.  Yea, they were still swinging from branches, and crawling up the trees, but a couple of them actually sat on branches and posed.  One even stuck his tongue out at me.  Seriously!

I was thrilled to finally get a couple pictures of the little guys, but still have not been able to capture a good picture of the elusive howler monkey.  Nevertheless, with spider monkey pictures in hand, we headed down the path listening to the continuing low scream of the howlers all the way back to the hotel.

After some breakfast and shower, we hit the road for the quick 1 ½ hour trip back to Belize and San Ignacio Town.  It had been a wonderful trip to Guatemala and Tikal.

One thought on “Tikal Part 2”