So day 4 In the Galapagos began at 6:00 a.m. with Harry announcing it was time to get up and get ready for a little kayaking along the Isabella shore.  There were not enough double kayaks so Steve and Nancy opted to go in the zodiac, while Shelly, Luten and I had the single kayaks.  Peter and James opted to use paddle boards.

Anyway, once dressed in swimsuits, we boarded our kayaks and followed the zodiac towards the shore.  And as luck would have it, we spotted our first Galápagos penguin just hanging out on the rocks at 6:30 in the morning.

The little penguin did not move as we approached in our kayaks so we sat and waiting to see if he was going to jump in the water and join us.  Unfortunately not. The penguin just stood there like it was in a trance.  Eventually the zodiac headed north paralleling the coast of Isabella and we dutifully followed.

Now after the initial bird sightings, we moved away from the rocky cliffs and into more open waters.  Our trip was taking us to a lagoon where we could see more flightless cormorants.  The downside was the lagoon was about a half mile away.  As we paddled, my arms began to tire and it seemed like we would never reach the spot.  I started to lag behind most of the group who were in two person kayaks so had double the people power, but quite frankly I was also lagging behind James and Peter on the paddleboards and Luten and Shelly in the single person kayaks so it is more likely I was just the weakest link!  Nevertheless, I persisted.

And just when I thought I couldn’t go any further, I saw the folks in front of me turn to the left, which I presumed was the lagoon.  I was a good five minutes behind, but was getting closer when three giants waves hit my kayak.  I manage to battle through the first two, but the third wave hit my kayak and pushed me into some rocks.  At this point, I yelled for help since the zodiac was up with the rest of the group.  However, by the time the zodiac reached me, more smaller waves moved me off the rocks and pushed me forward towards the lagoon.   Only a few short paddles later and I was in the calm of the lagoon.  YAY.

And the lagoon was definitely worth it.  Flightless cormorants were perched all over the rocks

and we even spotted a hawk high up the rocky hillside.  By now it was just about 8:00 a.m. and I was done in.  The Samba had moved close to our location and we were supposed to paddle out to the waiting boat.  However, I opted for abandoning the kayak and taking a ride in the zodiac.  My arms and stomach muscles will thank me later.

Once back on board, we ate breakfast as they moved the boat to another location for our mid-morning hike.  At 9:30, we loaded into the zodiacs and headed to Punta Albermale, the site of any WW II U.S. naval station, which was used to monitor Japanese marine activity because the U.S. was concerned the Japanese may try to take the Panama Canal.

We did a wet landing and were greeted by two sea lions and one very skittish sea turtle who took off as soon as our zodiac landed.  Anyway, 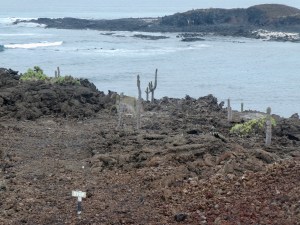 once we dried off our feet and donned hiking boots we set off across the lava fields before we reached the rocky path that would take us to the old station.  The 1 mile walk took us past cactus and tiny plants trying to establish some life amongst the lava fields.  We eventually reached the abandoned and decrepit station, admired the views and then doubled back, but this time walking along the sandy shore.  And unfortunately, the heat of the day was upon us.  I don’t know if it was the lava rock absorbing the heat or whether it was just plain hot.  Either way, it was really, really, hot.

But despite the heat, this part of the hike was really interesting because hidden amongst the lava were countless marine iguanas.  We encountered numerous male iguanas who would periodically nod their heads up and down.  Harry told us that this is a signal to other male iguanas that the area was their territory and to stay away.  It was fascinating to see the difference in size between the male and female iguanas (males are huge and have green and pink skins tones while the females are simply dark brown

Also, the mating season has just begun so we see a myriad of male iguanas nodding their heads and staking claim to territory in order to begin their mating rituals.  At one point, we ran into two males in a stare down nodding their heads at each other.  We fully expected a battle. But the slightly smaller iguana eventually gave up and moved on to find another rock to claim as his own.

We walked further along the sand and encountered a horrible smell.  Dead sea lion.  Ugh.  It was clearly a recent death, with no apparent reason why the sea lion died.   Ah Mother Nature.

So once we crossed back across the lava fields, the zodiacs came to pick us up, but not before one of the two sea lions who greeted us on arrival came right up to us among the many sally light foot crabs.  Curiosity I guess since most boats in the Galapagos do not land here.

Once back on the boat, we had a mid morning snack.  I showered and relaxed for a half hour before it was lunch time.  Soup, two varieties of salad, black beans, rice and chicken.  We certainly eat well on the ship.

We had about an hour to kill before out next outing (snorkeling), but our rest was interrupted by the announcement that we were approaching the equator.  We all gathered upstairs in the bridge where we all focused our attention on the Captain’s sextant.  As we approached the 0 MARK, we did a countdown from ten in Spanish.  When the markings on the altimeter read 0 000.00, we toasted the equator with a lovely coconut rum drink!  Easily amused tourists.

Anyway, after the toast, we headed to a bay to do some snorkeling where many, many sea turtles can be found.  So off we set in the zodiacs one more time.  The greeting party this time not only included sea lions, but we also encountered the sea turtles and lots of penguins.

Once we hopped into the water, it quickly became apparent that this was not going to be the best snorkeling for spotting fish because the water was really, really murky.  Nevertheless, we spotted too many to count turtles, two penguins matings and a male sea lion who thought it was fun to get really, really close to the snorkeling tourists.  Yikes.  We all had very close encounters with the big fella, and every time he came close we had to immediately move away as quickly as possible.  And while the sea lion is typically harmless, you never know with animals (mammals).

So we spent about an hour swimming around at the site before boarding the zodiacs and heading back to the ship.  Once on board and showered, my plan was to relax, but that was not meant to be.  About an hour after we arrived back, Harry was announcing over the loud speaker that there was a pod of “common” dolphins in front of the boat,.  I grabbed my camera and raced up the stairs to the bridge and what we saw was absolutely incredible.  Dozens and dozens of dolphins in formation, leaping through the air sometimes in twos and threes and other times random single jumps.  It was so incredible that every time we saw a dolphin leap through the air we all let out a howl.

We ended up following the dolphins for about twenty minutes before they disappeared from our view, it was simply incredible and an amazing, amazing way to cap off another wonderful day in the Galapagos.  Tomorrow we are off to Fernandina, the youngest island in the Galapagos chain, before we head back to Isabella.  For now, I need some rest.  All of these activities are so much fun, but incredibly exhausting.