Today we drove to the Qux region about 70 km north of Sheki. The drive took us over the Kakistskali river past numerous little farms and villages, lots of cows, and the beautiful St. George Church high on the hillside, which we would visit on the drive back, before we took the turn off the main road and onto a narrow road that would take us to the little village of Qum.

Our first stop in the village of Qum was a 19th century mosque. The building was very different from most mosques with no dome, and four square walls. There were a few carpets on the floor and a divider for the men’s and women’s sides, but apart from that there was really nothing notable about the mosque.

As luck would have it, the mosque was next door to a school, and as we were leaving the mosque a number of girls in the school yard came over and wanted to talk to me. The girls were out of their school uniform (uniforms are customary in all schools in Azerbaijan) and were on a break from classes (their version of recess so no uniforms). Apparently the girls were learning in English and wanted to practice. After a few shy words from the girls it was apparently time for them to leave because they all yelled “bye” and turned and ran to the school at the same time.

Anyway, the second stop for us in Qum was right across the street, through a gate and into someone’s back yard where the remains of a 5th or 6th century Caucasian Albanian church sits. The stone building was rectangular in shape, still had some columns and arches and was in a word … spectacular. It had not been refurbished, so what I saw was the remains from the original building. I walked around the building, in the building, sat down on the stone and generally reveled in the fact I could visit such an old structure. I am pretty sure Mahir and Javid were bored silly and expected we would only be there a couple minutes, but sorry … I am going to take my time.

We finally left the beautiful old church and as we walked back out of the gate, I ran right into a gaggle of school girls and boys in their uniforms going home for lunch. I immediately became the center of attention as the kids tried out their English. There were multiple “hi’s”, “what’s your name”, “how are you” and “where you from”. I tried to answer each child and at times felt like my head was on a swivel. I finally made it back to the van, but not before I had my picture taken with some darling little girls.

So after Qum, we spent the next half hour trying to find a route to take us to Ilisu village. Mahir must have stopped the van no less than 5 times to ask for directions. Each time the person would rattle off some instruction and point in the direction we were going. It was as if Mahir did not believe anyone when he received the directions. We finally, finally, finally reached the village at which point, we once again stopped two more times to ask directions to our next two stops.

Now the little village of Ilisu was set in a gorgeous valley and apparently has the nickname of mini-Switzerland. The village was filled to the brim with lovely stone houses and was surrounded by the rugged forested Caucasus mountains not far from the border with Dagestan (Russian Federation). The scenery was absolutely beautiful, if not a bit chilly as we had climbed a bit in elevation to reach Ilisu.

Anyway, after continuing on the same road through Ilisu for about five minutes, we reached the remains of an 18th century stone bridge, which is one of the attractions in the area. Now I actually would not call what I saw remains because the bridge seemed just fine to me, but a new longer bridge has been recently constructed and the old bridge is no longer used so I guess they just call it remains.

We got out of the van, and I walked across and back on the bridge and then sat for a bit to admire the gorgeous view. Athough the river was a bit sparse as it has not yet been replenished by the rainy season and seasonal snows, the views of the mountain scenery could not have made for a prettier picture.

I finally left the little bridge and climbed back in the van for a trip to the “famous” waterfall that lies at the end of the town and up the hillside in a little valley. We road in the van to a spot near the edge of town and then changed vehicles. We hired a local who owned a Russian made Niva Jeep 4X4 and boy did we need this vehicle. The road up the hillside to the waterfall was nothing but rock. And not little tiny pebbles. This “road” was covered in large rocks, was narrow and wound back and forth up the hillside.

Now the ride was absolutely hilarious as we bounced up and down, back and forth. At one point, my head hit the roof of the car. Javid kept asking me if I was OK, and all I kept telling him was “this is the road to Bwindi all over again”. (The road to Bwindi was all rocks and was one of the worst I have ever been on. The road in Bhutan last year was the worst, but it was all mud.) 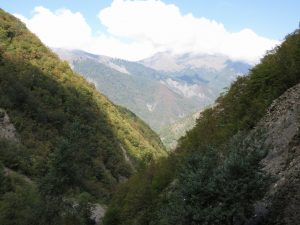 Anyway, we finally reached the waterfall after the ten minute bone rattling ride. The waterfall, however, was anticlimactic. It was little more than a trickle. The real star of the trip, though, were the magnificent views from the top. We were surrounded by massive boulders and mountains that provided beautiful views not only around us but to the valley below. It was simply lovely. After walking around and spending about 15 minutes at the site, we took the magical ride in the Niva back down to the bottom again.

By now it was time for a bit of lunch. Javid wanted me to try a local specialty, surfuli, so we stopped at a small little home restaurant (a kitchen attached to a residence with a small courtyard for seating). We met the lady of the house who showed us the kitchen, including lamb meat drying for the winter. We took a seat in the courtyard and were served tea, fantastic bread and a plate of sheep’s milk cheese and veggies, including peppers, tomatoes and cucumbers. The veggies were so fresh and tasty … I am not sure I will ever want to eat peppers at home again. I have been so spoiled in Azerbaijan with marvelous peppers.

The main course was finally served and … oh my God. The bowl each of us received was huge. The dish was made of small noodles, a broth and parts of lamb shanks. To this we added some plumb sauce and vinegar and garlic. Now Javid and Mahir scarfed the food down like it was the best think they had ever ate … me I as kind of “meh”. The food was ok, but I certainly would not go out of my way to order it again. Quite frankly, I found the taste rather bland. I ended up only eating a small portion of the mammoth bowl and called it good.

After lunch, we made a quick stop at the 18th century Sumuq stone tower that was used to watch for invaders coming across the mountains from what is now neighboring Dagestan. Unfortunately, the tower was not open so I have no idea whether you could still climb it or not and Javid did not know either.

We then began our trip back to Sheki, but took a detour about 20 minutes into the drive to visit the 18th century St. George Church that was built on a hillside now overlooking the road below. Mahir took the turnoff for the road and almost immediately stopped the car. He did not want to take the van up the road because it looked too bumpy (it was only bumpy in two spots as it turned out) so I had two options: hike up approximately one mile to the church or simply bypass it. Of course I jumped out of the car and began the hike up the road with Javid following close behind.

The hike turned out to be pretty easy with only a couple steep inclines. Before I knew it, we were walking down the path to the church. The church sits the site of what was once a 5th century temple and was constructed by the Hun tribe who were part of the Caucasian Albanians. The church was destroyed by invaders, but was rebuilt in the 18th century. The church is still in use today as a Georgian Orthodox Church.

We wandered around the interior and then walked outside to enjoy the beautiful views of the mountains and farmlands in the distance. We then walked back down the hill to the van and continued our drive back to Sheki. Javid and Mahir wanted to go for tea, but I was so full from lunch I simply wanted to go for a walk so I had Mahir drop me off at the top of the hill near the palace we visited the day before. I then walked back down the hill to my hotel in the brilliant and very warm sunshine. I was going to go back to my room and relax. I was done for the day.