So after one and a half rather unexpected days, it was nice to be back on the Samba with my shipmates and in my lovely little cabin.  I was in need of some sleep so went to bed immediately and while we slept, the captain moved the boat about three hours north of the town of San Cristobol to a point on Isle San Cristobol known as Punta Pit.  The former volcano is home to red footed boobies, blue footed boobies, frigate birds and storm petrels.  At this time of the year, there are numerous red footed boobies nesting in the trees as well as blue footed boobies doing their famous mating dance in hopes of capturing the attention of a female.

After breakfast, we loaded into the zodiacs and prepared to hike up the cliff to see the nesting areas.  I was well prepared with two bottles of water and a bottle of Gatorade so hopefully the dehydration issues are gone for good.

We were doing a wet landing so once we were close to shore, we hopped out of the zodiacs, dried our feet and donned our hiking boots.  The trail proved to be a little rocky and in spots it was as if we were hiking through a canyon with narrow walls on both sides of the trail.  In places the path leveled out into a sandy trail that made for a nice break from the rocky path.

As we hiked up the trail, we came across numerous blue footed booby pairs either nesting or still trying to make up their mind if they belonged together.  At one point we came across a male who was actually doing the mating dance.  Yay!  Unfortunately, I was only able to snag the first part of the dance where the male lifted one leg off the ground. The next part where the male flaps his wings and lets out a screech was not caught on film, but I can safely say, it was unique to say the least.

We eventually got to the crest of the volcano and had a magnificent view to the bay below where our ship was anchored.  And for the first time during the trip, I saw red flowers covering the ground.  This is supposed to be the rainy season here in the Galapagos, but the rains are late this year.  However, there must have been some rain in this area as the ground cover was budding or in some cases in full bloom.  It was really beautiful.

We continued our hike around the top of the volcano where we saw yet another red footed boobie with a chick and two blue footed boobies who were not to sure whether they should pair up or just be friends.

From the top, we started our trek back down tracing most of the steps we took on the way up.  As it usually goes, the climb down was a little tougher mostly because the sand made walking downhill rather slippery.  When we finally reached the beach, the wind had picked up creating a lot of “wave action”.  As a result, the zodiacs had a tough time landing and it took extra work on the part of Arnie and Jarnie, who were driving the zodiacs today, as well as Harry to steady the zodiacs so that that we could jump aboard.

Once we were safely back on the ship, we had a snack and then were supposed to get ready to do some snorkeling.  I had already decided that I would sit today out to be safe.  My legs were still a little swollen from the dehydration and I thought it best to continue my rehydration routine without putting more stress on my body by floating around for an hour or so in very salty water.  As it turned out, however, Harry thought the swells were making the water too murky for snorkeling so he suggested that we all simply go for a ride in the zodiacs to check out the shore line and rock formations off the shore.

The zodiac trip was actually pretty cool as it gave us a different vantage point for all the nesting on the side of the cliff.  And it was actually really surprising how many more nests we could spot from the water.  The cliffs were literally teeming with birds and many, many red footed booby nests.  We also crossed the bay to a large rocky outcrop where we spotted frigates and swallow tail gulls.

Once back on the boat we picked up anchor and headed to Isla Lobos (literally translated this means Sea Wolf Island, which is what sea lions are called in Spanish and so named because of the large sea lion colonies that inhabit the island). 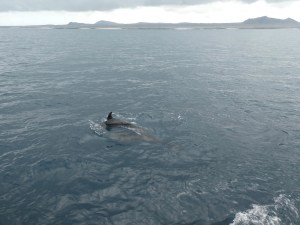 We had just finished lunch when the Captain announced he had spotted a large pod of bottlenose dolphins.  And this pod was indeed large.  Harry estimated there were over 100 dolphins all around our boat dipping in and out of the water and leaping in the air.  It was incredible.  And what made it even better is that this was the first time my shipmates had experienced dolphins surrounding the boat so their excitement made it even more fun to sit at the front of the boat and watch the amazing display.

The Captain circled the pod a coupled times before continuing our journey south, but even as we moved away from the pod we could still see the dolphins dipping in and out of the water and leaping in the air.

As we continued south, the trip took us past Kicker Rock, a former volcano that has eroded over millions of years to look like a giant stone formation sticking out of the ocean.

We circled Kicker Rock to get a look a the myriad of frigates nested on the crevices before continuing on to Isla Lobos reaching the island around 3:00 p.m.  We were going to snorkel near one of the sea lion colonies, but I opted out and instead went for a zodiac ride with Arnie as my driver.

We started at one end of the bay and puttered along the shore where we spotted numerous bird nests, blue footed boobies, frigate birds, marine iguanas and of course, the ever present sea lions.  The number of sea lions was truly amazing, but what really stood out was how many young pups were playing in the water.  At this point, the little ones have no fear so they were coming really close to the zodiac as we motored along.

We eventually reached the spot where our group was snorkeling, but it turns out they weren’t really snorkeling, but rather sitting in a little lagoon watching the baby sea lions play in the water all around the group.

Arnie and I continued to the end of the lagoon where the ocean waves were breaking against the rocks before doubling back on the other side of the lagoon.  And here we were entertained by a sea lion taking on an eel.  The sea lion had the eel hanging out of its mouth, and we couldn’t figure out if the sea lion was eating the eel or simply playing with it.  The sea lion took the eel under the water and then surfaced and swam on its back with the eel hanging from the sea lion’s mouth.  Eventually the sea lion went under and then surfaced without the eel.  We never did figure out if the eel was lunch or a play toy.

About an hour or so into the tour of the lagoon, we headed back to the ship.  Once on the ship, the captain steered the boat north to Isla Santa Fe and Barrington Bay where we were going to spend the night.  And as we sailed, the sun began to set on what was clearly the best sunset I had seen on my vacation.  It was a spectacular way to end the day!